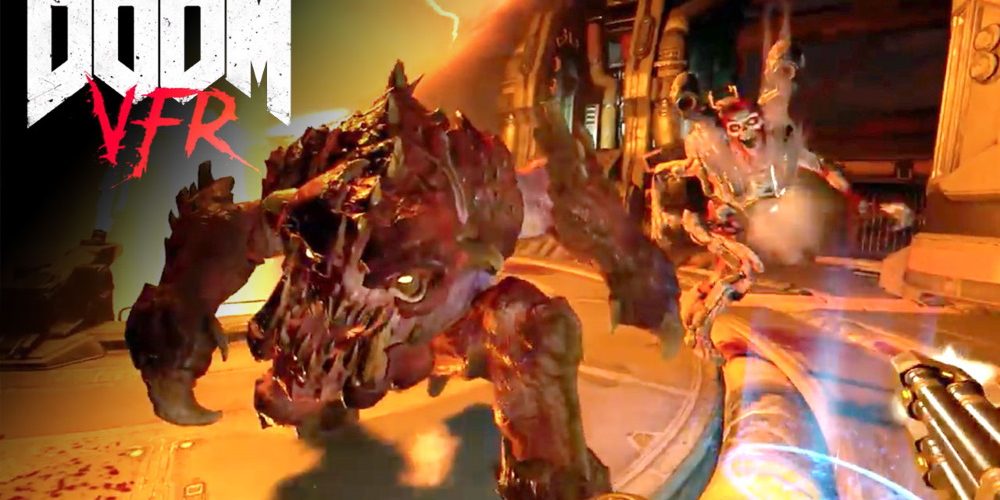 Like any avid gamer, you will most likely be waiting patiently for a new game to hit the market, as soon as its first trailer is released.

If you love brutal killing and were a fan of the frenetic, horrifying first-person shooter game DOOM, you must have wondered if it was going to be released in VR.

VR is a blissful experience for gaming.

Since the technology is still relatively new, there aren’t many good games that are available for players.

Just imagine the feel of stepping into the gaming world with all of the controls in your hands.

You who would be controlling any game either way but with VR the scenario changes completely.

You will be roaming inside the gameplay and fighting against your enemies right in front of you.

How is this not better than the flat screen experience?

One key to bringing out content that will be a sure hit is the re-making of the old super-hits.

Presenting the same game idea with a slight twist in the storyline (to keep it interesting) will definitely attract many buyers, who are excited to walk through old game sets with more power and control in their hands.

If you think the developers are taking an easy approach by re-making the old games, you are wrong.

DOOM VFR is a completely different version, that is built from scratch.

It only uses the basic idea of the super hit game DOOM.

Wait! Are you wondering why is it called DOOM VFR and not DOOM VR?

Now that you know what the F stands for in DOOM VFR, let us discuss more so we know whether or not the additional letter is justified.

How is DOOM VFR Different from DOOM?

The major difference between Doom VFR and Doom is the place and person in the game.

In DOOM VFR you play as a scientist, who has been killed during the original invasion of Mars and then resurrected.

The resurrection is actually the implantation of consciousness in artificial intelligence, which can take control of any robot present around the space station.

DOOM VFR adopts a different pace than DOOM, where you could walk around your enemies relentlessly.

With the VR version, you have to deal with your enemies,  as well as take care of things and put them in order around the space station.

The interesting part is that you can jump into the body of any robot littered around the space station, as needed.

This is unlike the DOOM version, where you were restricted to only one body.

This means unexpected implantation in the body of tiny Doomba or the Merchants.

This is perhaps the juiciest part of any game review since it discusses the actual storyline and what goes on within the game.

As mentioned earlier, when playing DOOM VFR, you consider yourself dead at the invasion of Mars by the bad guys.

You are now not a whole person.

You are rather someone with a pair of floating arms and a floating head.

This is very clever since your arms and your head are the only parts, whose movements are trackable at VR.

If you are expecting some scary stuff that will make you jump at short intervals while playing, you will be disappointed.

Unlike DOOM, the VR version doesn’t have any of those making you-jump-off-your-seat experiences.

Other than the scare factor, DOOM VFR has maintained DOOM’s reputation.

It successfully kicks your adrenaline beyond limits and has many very weird and absurd weapons to fight against the forces from hell.

If you have played the latest 2016 version of DOOM, you are aware of the weapons used in this game and how they work.

Each weapon has a distinct firing mechanism, with an advanced mode that is unlocked as you progress through the game.

Some of the weapons share the same ammo pool.

The game relies on several basic and timeless ideas.

You must be vigilant for the supply drops, be smart enough to keep changing your weapons and keep moving.

If you fail to do any of these things, you will die.

If you do not cycle wisely between your weapons, you will end up using the basic pistol with unlimited ammo that isn’t capable of finishing off big bad guys.

Similarly, standing at a point for longer means you can be crushed easily by one of the enemies.

The Movements Used in DOOM VFR

DOOM VFR as many crazy movements.

Since the character you are playing is a set of floating arms with a matching floating head, the movements involved in this game are mostly a combination of teleportation and dashing.

You can dash in any direction as required, whether to get out of the way of an enemy or to fling yourself in any portal.

When needed, you can point your controller and fling yourself on the green circle on the floor that you created.

The teleporting feature is commonly used in VR games and isn’t anything new.

In DOOM VFR, it is essential and effective.

You need to be witty, instinctive and accurate when teleporting.

If wisely used at the right time, this feature can save you from your enemies.

However, if you fail to use it correctly, you may find yourself sandwiched between the angry fists of one of the beasts.

The interesting part about teleporting is that it is a part of the combat mechanics.

You attack your opponent with a blow strong enough to stagger them.

You can now either choose to kill them from your weapon from a distance or you can teleport inside of that devil and kill it by sending bits of its insides scattering all over the place.

It sounds cruel and gory. However, that’s what DOOM is all about.

Killing the threatening beast by teleporting, is not only satisfying but earns you a considerable amount of health.

The telefrag kill is a strategy that you need to implement in your gameplay if you want to stay strong in a mob fight.

DOOM VFR would not be even half as much fun if the teleportation option was not available.

However, it may require some time to getting used to using the two movements turn-by-turn, when needed.

The key to using them successfully is not to panic when confronted with a huge hell-knight and death staring down at you from a few feet away.

Once you get the hang of things, it doesn’t take much to teleport behind a baddie or to turn 180 degrees to thrash them.

You can also use the ‘smooth locomotion’ movement to play.

This can be helpful for players who tend to suffer from motion sickness.

You may be a little disappointed since the display at PSVR is a little blurry and pixelated.

This is especially true if you are used to a crisp PC display.

There are three ways of playing DOOM VFR at PlayStation: with DualShock 4 controllers, Move controllers or the Aim controller.

The DualShock 4 handles the game just like the non-VR version of Doom.

The only difference is an added button to Teleport, which has become the standard mode of movement for VR shooters.

There is also an option to disperse a crowd called the shield burst ability.

It uses an overloaded electric shield to repulse a crowd of enemies.

DualShock 4 is the most non-immersive VR experience.

Playing with Move controllers is a struggle on its own.

It is natural to aim with the right controller.

However, the input has unfortunately been designed for the movements to be handled by the dash button located at the left controller.

This affects the type of precision required for a fast-paced game, like DOOM.

Your movement with Move controllers also gets restricted to forward and backward boosts and strafing boosts for right and left.

These movements are mapped to the face buttons on the controller and aren’t very intuitive.

The game relies more on teleporting yourself with the left Move controller and shooting with the right one.

It gets trickier when intense or quick movements are required.

You will often find yourself tripping over the connecting cable or turning in a totally opposite direction and losing the connection between the camera and Move controllers.

The third option of playing DOOM VFR on PSVR is with Aim controllers.

Controls with the move controllers are clunky and complicated, whereas DualShock 4 feels slow.

The Aim controllers combine the best features of both for a fun-filled experience.

They have thumbsticks and are Sixaxis.

You can set smooth movements and degrees of arcs based on your preferences.

While using the teleport and telefrag options, you can still see where the protagonist is heading.

With Aim controllers, throwing grenades becomes a little tricky, since you just need to press the button to do so.

The grenades require an arcing throw, which makes things a little weird until you become comfortable with it.

In addition to PlayStation, DOOM VFR is also available on PC with HTC Vive.

The displays are crisp and vibrant, compared to PSVR.

The biggest disappointment when playing DOOM VFR is that the gameplay continues for only four to five hours,  which includes the time required to hunt down the collectibles.

The actual game doesn’t reveal itself until the second half.

Once you become competent enough to handle the new teleporting and dashing options and get a few upgrades, the glory of the game starts becoming visible.

However, it lacks the level of brutality which DOOM had.

The Arenas in the game are wide open.

This reminds you of the hugeness of things and how real they seem in VR.

All the enemies from the nimble, to the annoying Imps to the towering Barons meet you right at the Arena.

However, with the VR experience, they look like they are standing right before your eyes.

Killing these demons by pulling the trigger at point-blank seems real, exciting and satisfying.

The Teleport and Telefrag options are the cherries on top.

You can spend some time exploring the old-school maps from DOOM in VR, which is a nostalgic and fun-filled experience on its own.

If this review has sparked your interest in the game, you can get it for $29. 99 for PSVR and HTC Vive.

Since the latest non-VR version was launched at a whopping $59.99, this price tag looks like a steal of a deal.

DOOM VFR is Bethesda’s effort to bring forward VR content that will bring back old memories to many VR shooters who were previously DOOM fans.

However, it is a good experience, with slight changes in combat mechanics.

It is a fast-paced, adrenaline-boosting, brutal game, which doesn’t last for more than four hours.

There are numerous glitches in the gaming experience, because of the controllers.

They kill the immersive experience to some extent.

At a few stages in the game, things seem a little out of proportion.

However, this appears to be ‘fixed’ in the later stages of the game.

You really need to use your sixth sense, if you do not want to be tripped or tangled with the cables while playing the game.

Having wireless controllers would make things much easier.

Bethesda has wisely built the game from scratch without completely forgetting the original game.

With new monsters and weapons, it has incorporated levels from the old game.

The scenery, barrels, pick-ups and even the doorknobs look like they have come straight from the 1993 release.

These small tactics are likely to bring back the fan base from the old super-hit.