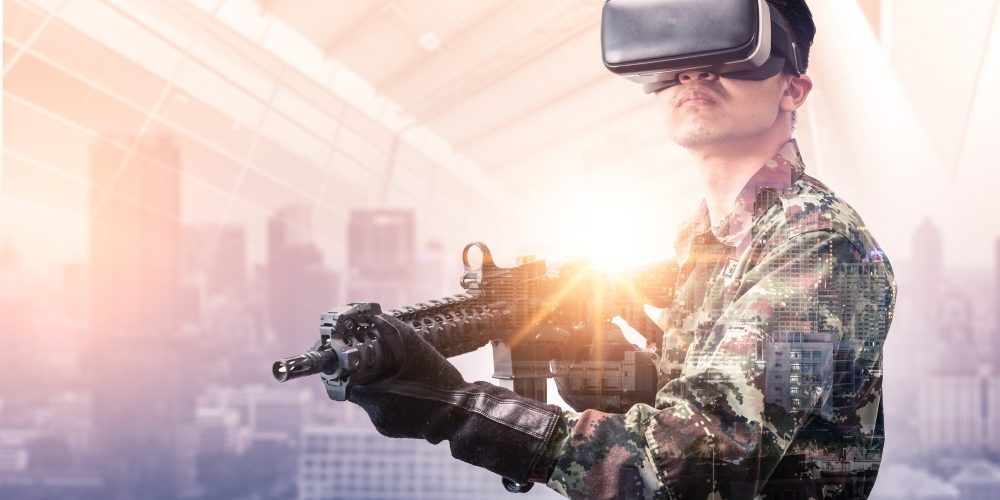 From great specs to amazing graphics to easy control, games have evolved over time offering different features to gamers.

The shooter is among the top genres in PC gaming and console.

With the high influx of VR shooting games, it is becoming increasingly hard to settle on one.

We will review some of the best VR shooting games to make it easier for you to choose one that is suited to your virtual reality playtime.

Packed with great graphics and capabilities, this game is not only thrilling but also fun-filled.

You can manhandle robots in different ways and even use their parts as weapons in the game with all missions taking about four hours to complete.

Movement is through teleportation, and it allows you to creep behind the robots and attack them.

Completing a mission unlocks other weapons.

Secondary levels are even more fun as they give you the chance to complete missions in thrilling ways such as trying to reach a level without firing a single bullet.

Are you a fan of retro shooting?

The Space Pirate Trainer offers you the retro arcade action that takes you years back.

In the game, you are a space pirate with the duty of shooting droids that are unleashed in the game while avoiding attacks.

You get an amazing variety of weaponry and gadgets to help you in your quest, especially for deep strategy elements.

They include a grenade launcher and rapid-fire among others that are suited for different gaming scenarios.

The shooting never stops on the Space Pirate as power-ups that appear from the fallen droids need to be shot at for activation.

The power-ups include super lasers, protective barriers, and lock-on missiles among others.

The game is not complicated thus making it a great choice for new shooting games players.

This game is based on the horrifying zombies made even more thrilling by the pressure to survive.

The zombies vary in size and shape and have to be fought in the darkness, making the game even creepier.

This is no easy fete for a player, especially a newbie.

The zombies come in droves, ensuring that the player remains busy throughout the game.

The game has fantastic graphics and terrifying sounds that are bound to get your scared enough to shoot all the zombies on your way.

You can use a weapon of your choice to repel the zombie attacks thus giving you control of the game.

With a massive choice of weapons to kill the undead, this game gives you the rush you need when playing it.

You play as an agent with the mission to kill a crazy doctor who keeps turning the dead into zombies.

With its smart HUD capabilities, it is easy to control the game using a gamepad or trackpad.

The game has additional lines to keep you wholly entertained as you fight to save the world.

It also gives you the capability of traveling through different environments.

This military simulator is equipped with communication equipment to help you communicate with your squad.

You play as part of a team on an expansive battlefield with the option to choose a weapon from a wide array of weapons that are easily customizable.

It features easy to use controls and good graphics.

Even with the developers working towards launching a better version of the game, it is still an excellent choice for military simulator lovers.

You are dropped off on a planet where you are left to look for your lost crewmates.

In the game, you will go through a terrifying stretch as you struggle to outrun and overpower horrifying insects.

You cannot stop moving since you do not know what is coming while switching between weapons.

This sci-fi action game is impressive and will entertain for a long time.

A game that allows you to teleport to the enemy side and use their weapons against them is most definitely worth checking out.

The Damaged Core enables the player to change into a robot and destroy other robots.

This feature makes the game one of the best VR shooting games in the market today.

The game graphics feature a fantastic scenery with controls that are easy to use.

The game features many robots, which keep you busy as you immerse yourself in the task ahead.

However, despite all the great features, this game is heavily controlled meaning that the player is only confined to the combat space.

It has cameras that can make the experience better and action-packed, but they will not help you in completing your mission.

For fans of fast-paced games, look no further than the Raw Data.

This game is completely action packed and rough.

In Raw Data, you get into the character of a hacker who is confronted by humanoid robots.

The game gives you two heroes to choose from, and it has both the single-player and multiplayer modes.

The developer has terrific gadgets and tools within the game to make it easier for the gamer to escape the robots.

These gadgets include teleportation that enables you to cool down from the rush. How cool is that!

The game gives you amazing unlocks and upgrades to make your play even more enjoyable.

This game is only ideal for professional gamers since it is very rough and fast making it hard for beginners.

Just like the name suggests, this game is highly pumped up.

The violence in this game is out of this world. The game allows you to attack in a frozen period.

With motion controllers, the level of damage one can do in this game is massive.

With its impressive sound effects and graphics, this game is worth checking out.

Combined with amazing graphics, great sound, and awesome gun mechanics, this game is a great option for all players.

You use the daydream controller to shoot your way through the West story which is completely rousing.

The controls on the game are easy to use, ensuring you can focus on beating the bad guys.

The shooter can be played in single-player mode or Horde mode with both supporting online multiplayer.

The game is defined by high-quality graphics and numerous detailed places to explore at each level making it exciting and diverse.

This makes it better than other shooters that only offer one-way playing grounds and dull graphics.

Modifications have been made to the game such as automatic reloading that fast paces the game.

It makes you feel like you walked straight out of a zombie apocalypse!

Virtual reality is the creation of a simulated environment using computer technology.

It puts a user inside this created illusion to experience a reality that is nonexistent in 3D.

Hosts of technologies are used to create this experience.

The user can interact and explore this world with the capabilities to manipulate it and perform several actions.

VR simulates touch, vision and hearing making it an experience worth trying out for anyone.

VR synchronizes the hardware, software, and the user’s senses, making him or her feel like he or she is present in this new world.

For VR to function, it requires the content source and the user device.

Content is transferred from the source to the display headset through an HDMI cable or wirelessly using a smartphone.

The headsets that work with smartphones act as both the source and display of the VR content.

A small smartphone is slotted into the headset already.

Wired VR headsets can use one or two feeds sent to one or two displays, i.e., one per eye.

Sometimes lenses known as goggles can be placed in the middle of the user’s eyes.

They should be well-adjusted since the distance between the eyes varies from person to person to provide the perfect viewing experience.

These are used to reshape and focus the two 2D pictures at a specific angle to create a 3D image.

Other systems that can be incorporated into VR are special gloves, directional treadmills, and goggles.

Additional hardware is used in gaming since it is interactive and motion based.

Different types of wearables are also coming up to make the experience even more fulfilling.

The devices are created using measurements such as motion delay, image resolution, pixel persistence, the field of view, audio and video synchronization, and refresh rate.

The major market players are Oculus Rift, Microsoft HoloLens, HTC Vive, and Samsung GearVR, among others.

Today, VR has been significantly adopted in different industries and sectors.

The sectors that commonly use VR include architecture, aviation, military, science for research and visualization, and the video game industry for interactive experiences and precision gaming.

Even with this evolution of technology, VR is not without several limitations.

The high cost of this technology is the major challenge.

The gadgets are not cheap and may not be affordable to many people.

As a result, most people only experience VR in movie theaters or VR shops since they cannot afford to buy them.

But with the expansion of technology, it is expected that the prices will keep reducing as more and better gadgets are produced.

Nausea attacks are also reported by those love playing VR shooting games, especially after the removal of the headset.

This is because the environment in the headset is controlled with the limited movement and proximity of the screen to the eyes making one uncomfortable.

Moreover, the continued rashness of the gadgets on the users head can be harmful after some time.

The weight of the headset can also strain one’s head and eyes.