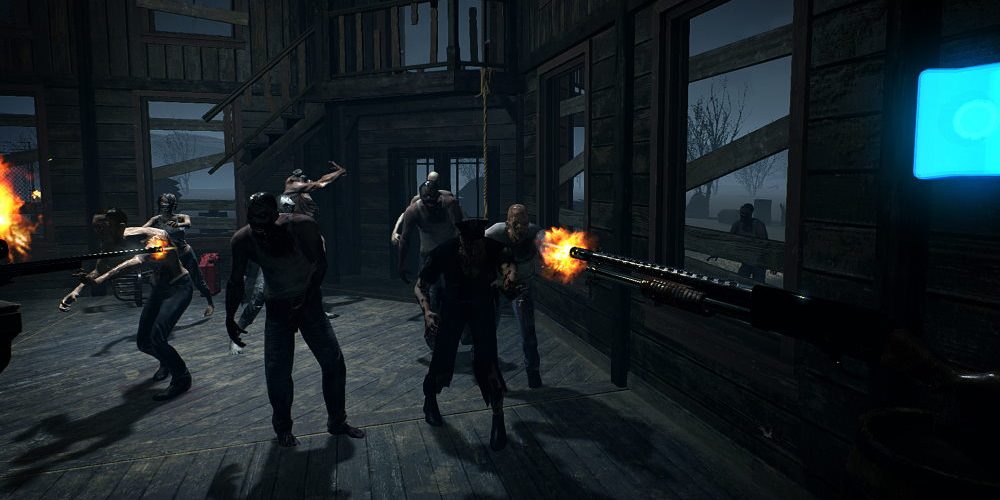 You have an awesome VR headset ready to take you to an immersive virtual world, but you can’t find something that you will really love.

It happens to many VR gamers, especially because there isn’t a big community in the VR space to show all the awesome VR games that are in the market.

All of this results in stunning games being released that people don’t know about.

Zombie shooter is a whole separate genre on its own.

Nothing satisfies you more than loading up the hand-held machine guns and emptying them on a horde of juicy zombies, especially in VR.

However, you might not be aware of the many stunning VR zombie shooters that are out there waiting for you.

Our goal is to keep our visitors aware of all the goodies available in the VR space, so you can spend less time scouring for worthy titles and more time with your headset on and your virtual guns loaded.

In this article, we will talk about the best VR zombie shooters that you probably haven’t tried and will absolutely love.

Arizona Sunshine is a game that you simply cannot miss.

If you are anywhere close to VR zombie shooters, you probably have played this one.

However, this makes the game even more crucial on this list, so that people who haven’t played it can learn about it.

The game is an absolute must for any VR gamer, let alone just zombie shooter enthusiasts.

Arizona Sunshine will put you in the middle of a small yet open-world post-apocalyptic world, where zombies have taken over.

Your job is to explore different areas in the world, while battling different sizes of zombie hordes along your way.

The best part about this game is the co-op multiplayer that lets you play with friends and other VR gamers around the world.

What’s better than one set of AK-47s killing zombies?

Arizona Sunshine goes for $39.99 on Steam and can be played on the HTC Vive and Vive Pro, as well as the Oculus Touch.

The second most recommended game on this list is Zombie Buster VR.

This game is loved by everyone who tries it.

This is primarily because of its absolutely stunning visuals.

Among all the games we list in this article, Zombie Buster has the most amazing graphics.

They will get you hooked within the first 60 seconds of your gameplay.

Otherwise, the controls aren’t very glitchy, the gameplay mechanics are robust and the collection of weapons in this game is superb.

Zombie Buster VR is set in the year 2075, when the Mars colonization project is in its final phases.

However, the project has been abruptly stopped, due to a rare mutant bacteria strain that was  discovered.

The bacteria have turned all the firstcomers into different types of zombies.

Players enter the scene as members of a secondary investigation squad, which ultimately must exterminate the monsters and get the bacteria under control.

Zombie Buster VR is a single-player game, which can be played on the Oculus Rift, as well as the HTC Vive.

HordeZ is more of an arcade game, where the main mission is to keep killing zombies as long as you can.

The game isn’t entirely about killing zombies pointlessly, however.

You can keep playing and rack up scores to climb the leaderboards and make your name shine among hundreds of zombie killers.

HordeZ has simple graphics but its gameplay mechanics are amazing.

You get extra points for hitting critical parts of the zombies, like their heads.

You can choose from a plethora of melee and ranged weapons that include katana swords, assault rifles, heavy machine guns, and throwables.

Zombie Riot VR is another interesting implementation of the VR zombie shooter concept.

Instead of endlessly cutting and killing zombies, Zombie Riot VR gives you the option to choose your playing style.

Zombie Riot is a game where you can be stealthy, robust, strategic and reckless, when dealing with zombies.

If you want to hide from zombies and use noiseless weapons to quietly finish off the zombie attack wave, you can do that.

If you want to use the environment against zombies, you can ignite fuel gallons, throw lanterns and push things off a ledge to take your enemies.

And of course, if nothing sates your desire of killing zombies, you can just buy a bunch of weapons, load with them all the ammo you can carry, and just obliterate your enemies.

The graphics may not feel that realistic but the cartoonish looks of the game only improved our experience.

One of the Last

One of the Last has an amazing setting and unparalleled gameplay.

You start in an open world, where you are among the few humans left who aren’t infected.

The world is open for you to explore, where you can find ancient relics after going through a series of challenges and puzzles.

If you spend too much time in one place,  a zombie horde will eventually find you and you’ll be in trouble.

During our gameplay, keeping an eye out for rogue zombies, while looking for clues was one of the best things about the game.

Being able to upgrade our weapons using the ancient relics we found was another.

It was always exciting to see how the upgraded weapons will behave in front of a zombie horde.

The game’s graphics are very good, if not stunning.

The controls are intuitive and simple to understand.

It is a must play in our books.

One of the Last is available on Steam for $12.99 and is currently only available for the HTC Vive.

Zed Shot is one of the best zombie survival games that you’ll find on the Samsung Gear VR.

The game’s graphics are extremely realistic and the ambiance is so dark that you can barely see anything, without pointing your flashlight in that specific direction.

In our opinion, the best thing about Zed Shot is that it has a clear mission.

Instead of just killing the mean greens for hours, your task is to survive through the night.

The game starts in an abandoned hospital.

You open your eyes in a dark room, where a flickering lamp is the only light source and there is a pistol right next to it.

If you pick up the pistol, the lamp will go dark.

The flashlight on your pistol will be your only aid.

Traverse through the abandoned hospital, enter the underground catacombs and run through the sewers to get yourself to safety.

Meanwhile, numerous zombies will be running to sink their teeth into you and all of them will die by your hand.

If anyone says that zombie games are dying, especially in VR, tell them to look up Drop Dead: Dual Strike Edition.

It is a successor to Drop Dead, a co-op zombie shooter game which was originally developed for the Oculus Rift.

This sparked the need for a completely redefined and revitalized game to replace the original title.

Drop Dead: DSE is among the few VR zombie shooters that have an amazing single-player campaign, as well as co-op multiplayer mode.

The story campaign follows a protagonist who is on the mission to defeat Dr. Money, the evil genius who first unleashed the zombie apocalypse.

The protagonist teams up with an ex-CIA agent and sets out on a quest to remove the zombie plague from its roots.

The gameplay is really very simple.

What do you get when you have an axe in one hand, a magnum revolver pistol in the other, and zombies in front of you?

If you are thinking “hours of pure hack n’ slash”, you are absolutely right.

Drop Dead: Dual Strike Edition is available for the Oculus Quest and Oculus Rift for $14.99.

However, it still is a very worthy zombie shooter for anyone who loves those games.

The game’s graphics are cartoon-like.

You’ll also usually get mellow vibes from the background music and the visual setting.

The point of the game is that you are getting ready for a real zombie apocalypse, so you must train and improve your survival skills.

Zombie Training Simulator has three awesome areas where you can go and train.

In any area, you will be given an array of different weapons and chipboard zombie-looking targets will pop up all around you and move towards you.

With enemy targets coming from different directions, you must constantly look around and strategically shoot the zombie targets, while making sure that you preserve your ammo and don’t let a zombie from any direction get to close to you.

It’s a cool new take on the zombie shooter scene.

We are sure that you will love it.

Sour Patch Kids: Zombie Invasion is just about the most adorable zombie shooter you will ever come across.

As the name suggests, the game is heavily oriented towards kids.

This is why it has no bloody graphics.

Zombie candies aren’t as gruesome as you’d notice in other games.

However, even after all that, we couldn’t convince ourselves that this game is just for kids, because everyone who tried this game loved it, regardless of their age.

The premise is very simple, Zombie candy has gone rogue and is attacking your house and destroying all the Sour Patch Kids candy lying around.

You’re in charge of dealing with zombie candies and protecting all sour and sweet stuff from the enemy’s hands.

You get to sit snugly inside your anti-zombie defense tower, which has cool robust weapons to destroy the zombie candy.

You can upgrade your tower’s defense and weapons after each level and experiment using a different combination of weapons available for your tower.

Sour Patch Kids is among our top recommendations for VR zombie shooters and can be played on Samsung Gear VR.

Finding VR zombie shooters might not be the easiest task today, mainly because of the distributed nature of all the VR content in the industry.

Different manufacturers have chosen to use different platforms to distribute content.

Searching on these platforms is just not that accurate.

Moreover, the only way to determine if a game is worth playing, is by relying on reviews by the very few people who have played it.

Nonetheless, there are many VR zombie shooters in the VR gaming industry that are worth your time.

The games that we have listed in this article are just some of the best ones, after playing games on this list for months.

You can always find more VR zombie shooters, whose graphics will make your eyes pop out.

Moreover, some of the games on this list have a playtime of up to 40-50 hours, so it’s not like you will be done with this list anytime soon.