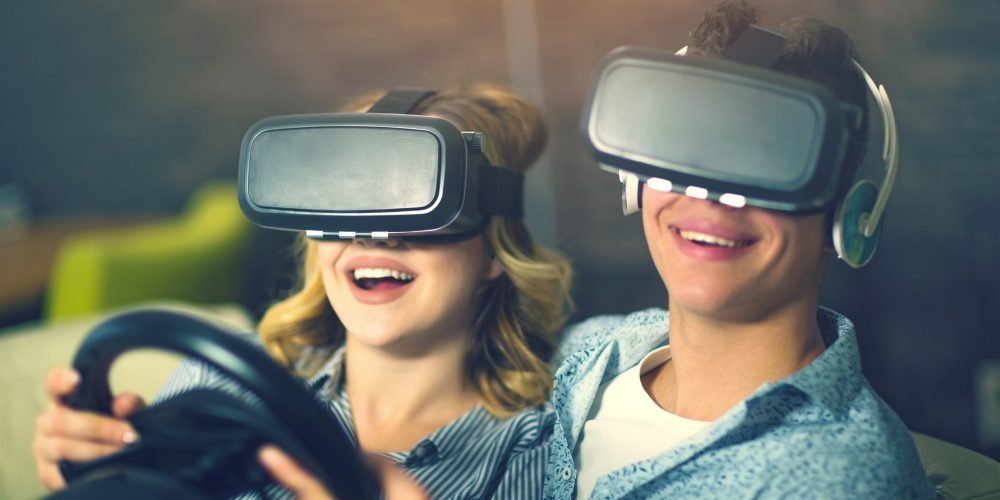 There are few genres better suited to VR than racing.

Think about it – your headset is already a little bit like a racer’s helmet and most games offer you a steering wheel view of the game.

If you’ve already got a headset ready to go, you’ve absolutely got to at least try out a few racing titles.

VR racing is as much as most will get to being in the seat of a race car, so why not give it a go?

If you really want to fulfill your need for speed, you absolutely must take a look at the games below.

Who says you need pavement to race?

DiRT Rally is an off-roading game that puts you in control of some of the world’s finest rally cars.

This game is more about precision driving than anything else, though it does offer a surprisingly deep career mode that will require you to upgrade your cars, repair your damage and manage a racing team in order to progress.

This game is only available on PSVR, and it does require purchasing the game plus a VR DLC in order to play.

Another game that’s ported over from the PC and consoles, Project CARS is probably known for being stunning more than anything else.

Beneath the shiny exterior lies a ridiculously deep game, though, with a ton of options and some in-depth tuning that would make even a car pro blush.

If you’re going to pick up this version of the game, it’s recommended that you take a look at the Game of the Year Edition.

It includes all of the DLC packs and a bevy of extra cars, which makes the game even more of a value.

While iRacing might not have the pedigree of some of the other titles on this list, it’s a fantastic racer in its own right.

More of a simulation racer than anything else, it’s a subscription racing game that allows you to join leagues and take on other racers from around the world.

It’s got a variety of famous tracks and some great mechanics for putting together your own tournaments.

It’s a game that can quickly overwhelm newbies, but it will scratch a racing itch you may not know you had.

If you’re a console gamer, you probably have mixed feelings about DriveClub.

The game was meant to be a centerpiece of Sony’s Playstation Plus program but ended up a bit of a bust.

It’s important to note, though, that DriveClub VR ended up being a bit of a different beast.

Instead of offering a limited experience, it provides one of the most varied racing experiences on VR headsets.

This VR racing game title puts you in control of over eighty fantastic cars and allows you to drive them on a hundred tracks.

There’s both single-player and multiplayer action to be had here, with a price point you can’t ignore.

Definitely a must-have for users of Sony’s PSVR.

Need for Speed No Limits VR

Need for Speed is one of the best-known racing franchises in the world.

It’s gone through a ton of different iterations and made its presence known on virtually every gaming platform, so it should come as no surprise that it’d eventually wind up as a VR title.

This version of Need for Speed is a little less robust that some versions of the game, but it’s definitely well-made.

If you are looking for a solid racing experience that captures the fun of arcade racing, this is the game for you.

While Project Cars was a lot of fun, it suffered from being made without VR in mind.

The sequel was all about VR straight out of the gate, with more cars, more tracks, and a control style that absolutely favors racing in a VR view.

With an enhanced career mode and an overall better presentation, it’s the definitive version of the game.

It should be noted that there are still a few bugs in Project Cars 2, so perfectionists might want to wait on this one.

It’s certainly a great experience, but the first iteration of the game is still cheaper and a great deal more stable.

One of the best parts of VR racing is that it doesn’t have to be real.

If you were a fan of older titles like WipeOut, you’ve absolutely got to try Redout.

This game is all about the speed, with colorful tracks that will make your head spin.

With twenty tracks and seventy-five different events, it’s a great game on which to test your reflexes.

It’s one of the best ways to really get your blood pumping during a race, especially if you don’t feel overly attached to realism in racing.

One of the most detailed VR racing games out there, Assetto Corsa features real-world tracks and a host of authentic cars in order to bring out the racing fanatics.

It’s as real a racing experience as you’ll ever find, down to the feel of racing on imperfect tires and the subtle changes in engine sounds as the heat increases.

It’s not a game for casual racers by any stretch of the imagination, but it is a good showcase for how VR can enhance the racing experience.

On the other end of the spectrum is VR Karts: Spring, a game that’s less about speed and more about recapturing a bit of childhood fun.

A great homage to games like Mario Kart, this kart racer puts you in the midst of the item-throwing, power-up using action.

You can play against the AI or take on other players in this game, with no blue shell in sight.

Do you already have a favorite VR racing game?

Have you found that one VR platform is better for racing than others?

Don’t keep this information to yourself- let us know exactly what you think about VR racing games!

Virtual reality is one of the more misunderstood technologies in the entertainment world.

While it’s certainly an immersive tool, it’s not one that’s meant to be a picture-perfect replacement for reality.

Instead, modern VR is an enhancement of the classic entertainment experience, one that has an ability to drop players and viewers directly into the action.

Instead of viewing things from the removed perspective of a screen, players are given the chance to get up close and interact with some of their favorite settings and properties thanks to some pretty clever technological tricks.

At its core, VR is currently more of a viewing technology than anything truly new.

Virtual reality is highly dependent on the tools used to run the programs themselves, which in most cases are either powerful smartphones or high-end gaming computers.

What you’re getting out of the technology is the ability to view something that’s typically 2D in more of a three-dimensional setting.

You get the perspective of being placed directly into the action, all thanks to some clever work done with multiple screens and first-person perspective.

These displays present a different image to each eye, which is processed by the brain as having a great sense of depth and ‘realism’.

While the images might not have the fidelity of some of the higher-end video games out there, the dual displays trick the mind into processing them as something that’s a little more real.

Modern VR has coupled the stereoscopic displays, which have been around for years, with a number of other advanced technologies.

Most headsets have a number of tracking sensors that essentially play the same role as the camera controls in video games.

As the user moves his or her head, he or she can see more of the game world – helping to further increase the level of immersion.

There are a few different methods of control for VR, though most still use video game controllers.

Oculus Rift and PSVR both have controls that are meant to better simulate the user’s hands in VR, though these tools largely serve the same purpose as the controller.

Even though you can’t reach out and interact with the environments you see, all the work done by the headset itself makes for a much more convincing experience than you’d get from a more traditional 2D display.

VR is in many ways still in its infancy. It’s come a long way in the last decade, but it still has a long way to go.

Devices like the Rift, PSVR, and HTC Vive still make use of very early solutions to problems that are in the process of being solved.

Even though these technologies are still on the ground floor, playing with them can be exciting – after all, even in an early state they still provide gaming and viewing experiences that simply cannot be replicated elsewhere.