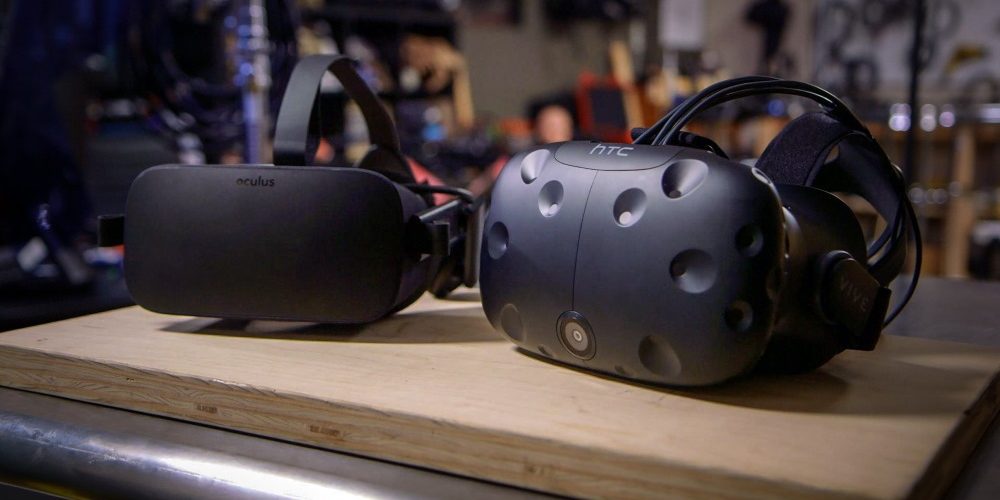 Virtual Headset should be a very well-known term to you, if you are familiar with mainstream tech development and/or video gaming.

Even if you don’t know how far the technology and the content for this technology have come, you should be aware of the concept behind it and chances are that you are at least excited enough to give it a shot.

You know you want to try VR, you have been given cool tips and reviews by friends, you know it’s a magical experience and you want to go through with it.

Now, all you have to do, is buy a VR headset, put it on and get your mind blown.

Is it that simple, though? Sadly, it is not.

The first obstacle that will stop your progress, is the choice of headset you want to go with.

We wish there would be a single VR headset that would be universally known as the best VR headset for entry-level VR enthusiasts.

The Oculus Rift and the HTC Vive are very close competitors in the PC-tethered VR headset category and it is no surprise that most upcoming VR enthusiasts find themselves in a very confusing situation, when trying to choose one of them.

You have to consider all the different aspects of a VR headset, before trying to make a final decision.

Researching those headsets require some work.  You could still be missing some key points.

It would be great have a clear-cut guide that could walk you through all the important aspects of these two VR headsets.

This is where we come in. This article has been specifically written for people who want to get into virtual reality and have little to no idea what they should worry about when buying their first PC-tethered VR headset.

These two headsets have been reviewed before, but at that time, many things were different from now.

For instance, the development side was not as mature and consistent; a game for one VR headset wouldn’t be available for the other one, the tracking and controlling software was immature and a number of similar issues.

At this point in time, Oculus and HTC both have a new flagship and the Rift and Vive are now widely accepted as ideal entry-level options.

The content on both of the headsets is almost of the same quality, so that  is no longer an issue in 2019.

All of information provided leads to the realization that as of mid-2019, the Oculus Rift and HTC Vive can only be compared to each other on the basis of their hardware, design, and tracking systems.

These are the main areas that we will focus on in our review. Start taking notes, as we dive right into it.

A VR headset is as good as the gaming computer it is connected to.

One of the most important things about any PC-tethered VR headset is its display panel.

The quality of the panel, the pixel resolution, the field of view, the size and the refresh rates are the specs that you should be looking for.

The Oculus Rift and HTC Vive both feature a display panel with a total resolution of 2160 x 1200 pixels.

This means that each of the two sections in the VR headset has 1080 x 1200 pixel resolution.

Both the panels have the exact 90Hz refresh rate which is actually quite essential.

It has been found out that a refresh rate below 90Hz in VR, could easily lead to motion sickness, headache and nausea.

For those who don’t know what refresh rate is: it’s the number of times, a display redraws a new frame on the screen in a second.

Both the screens are approximately the same size but have different fields of view.

The HTC Vive is capable of showing about 100 degrees horizontally, while the Oculus Rift can display around 80 degrees.

However, both the companies officially claim their FOVs to be 110 degrees.

HTC and Oculus both have their own cool motion controllers.

Both of the controllers are proprietary designs and work based on cutting edge technology.

They use a different solution to track the motion of the controller.

It’s the standard controller support that sets the two VR headsets apart in this race.

The Oculus Rift only supports Xbox controllers, if you decide to not use the motion controllers.

The HTC Vive, however, can work with any PC-based game controller.

While you may not even use a standard game controller with VR, this information might still be helpful for someone who would prefer using a game controller.

Most people who do sitting VR gaming prefer game controllers over motion ones.

It is worth mentioning that Oculus and HTC released their PC-tethered flagship at more or less the same time.

However, HTC Vive was shipped with its motion controllers immediately, while the Oculus Rift could only be played with a game controller at the time.

Oculus introduced its motion controllers at the end of 2016.

This doesn’t change anything today.

However, it should be known in our opinion.

In a traditional PC, the number of cables going behind the casing might not be change the experience.

However, it does in VR. The more cumbersome your setup is, the more disturbed your experience is while you’re immersed in a beautiful world.

The Oculus Rift is known for having a slimmer cable than the one used for the HTC Vive.

This makes the main cable for HTC Vive weigh a bit more than it should.

During our experience, we could feel the cable dragging around as we moved.

On the other hand, Oculus Rift’s base stations (Constellation Sensors) need to be connected to the gaming computer through cables, instead of a wireless option.

You need base stations for Oculus Rift, when you want to play while standing up or want to enjoy a game in room-scale.

Since they need to be placed in such a manner that they cover a large area of the playing field, it can become a bit frustrating when cable managing.

You can always run the cables openly across the room, but it’s just something we would not recommend that you do.

Running the cables in a manner that doesn’t cause anyone to trip over them or pull them, is the best practice.

HTC’s Vive is superior, in this regard, since it allows its base stations (Lighthouses) to be connected to the gaming computer wirelessly using Bluetooth 4.0.

Using this option frees you from any cable management worries and makes the setup neater in general.

The audio options available for a VR headset are important, when you’re evaluating a headset.

The immersion of virtual reality worlds requires the sound to be perfect and consistent all the time.

The Oculus Rift comes with a built-in microphone and integrated headphones on the VR headset’s strap.

The HTC Vive does have a built-in microphone, but it doesn’t come with integrated headphones.

HTC offers the Deluxe Audio Strap, which is a more comfortable strap for the headset  and features the integrated headphones for $90.

We will admit, paying $90 more for what Oculus Rift features out of the box is a letdown.

However, with HTC Vive, you can connect any headphones of your choice.

However, connecting your own headphones on an Oculus Rift is a very difficult process.

You must connect the headphones to the gaming PC and redirect the audio through the PC’s output rather than the headset.

This makes the two headsets even.

We will be honest. Both headsets are designed very smartly.

HTC and Oculus have made sure that their headsets are extremely comfortable and don’t cause any sort of irritation or stress, even when used for longer gaming sessions.

However, the comfortable touch on your skin isn’t everything.

There are a few things about each headset that sets it apart from its competitor.

It is important that you know about them.

For starters, the weight of the headset is within 50 grams of each other.

However, they will feel different on your head.

The Oculus Rift has a more refined uniform exterior and the headset doesn’t protrude from your face as much as the HTC Vive does.

The HTC Vive looks bulky and speckled, due to all of the sensors that it has.

Your nasal bridge might feel a bit uncomfortable after half an hour of using the HTC Vive.

The strap is our next point of focus. Neither of the two industry leaders were able to design the headset, so that the weight is perfectly balanced.

However, the design of the strap made a huge difference in this area.

The Oculus Rift’s straps do a better job of holding the weight of the headset off your nasal bridge and feels more comfortable.

The HTC Vive’s stock strap is not that comfortable.

The HTC Vive Deluxe Audio Strap, however, is an absolute miracle when it comes to comfort.

This is because it does a great job of shifting the headset’s anchor to the back of your head.

While the hardware and the design are very important, nothing matches the significance of the accuracy of a VR headset’s tracking system.

No flaw in design and hardware shortcoming could make you ruin your experience as much as an inaccurate tracking system.

The tracking is what maintains the immersion. If you lose tracking for just an instant, and you’re snapped back to reality.

It will also put you in a really bad mood.

The HTC Vive features more than 30 sensors in the headset itself.

These sensors, combined with the front-facing camera, perform the magic of flawless and accurate tracking of the VR headset, while making sure that you’re not in any sort of danger.

The sensors, front-facing camera, and the base stations of the HTC Vive draw a virtual boundary of the play area you have defined, when setting the headset up.

The system tracks every rotation and every displacement of the player.

It accurately translates it into the game, while making sure that you don’t leave the virtual boundary you drew.

HTC Vive’s tracking system is definitely better than the one in Oculus Rift.

Remember when we told you that Oculus Rift has a more compact, visually smooth and consistent design?

Seamless tracking is what Oculus had to sacrifice to make that happen.

The headset’s internal tracking system is not only inferior to what HTC Vive offers, but it also can’t track the outside environment.

The Oculus Rift depends completely on the base stations to track the player’s movements.

It is known to lose tracking data, if you only use two base stations.

If you chose the Oculus Rift and just used it with the two base stations it comes with, you will soon realize that you will need to invest in a third base station to get anywhere close to seamless tracking.

Buying the third sensor does mean that you will need to think more about cable management.

You will need an extra high-speed USB port on your computer.

Both the headsets are absolutely amazing.

The HTC Vive has  as many flaws as the Oculus Rift.

However, it’s the type of the flaw that makes a difference.

If you are the kind of person who only wants the best gaming and tracking performance and paying around $100 more is not an issue for you, HTC Vive is your best option.

If comfort is your highest priority or you’re trying to to save as much money as you can, we would encourage you to go with the Oculus Rift.