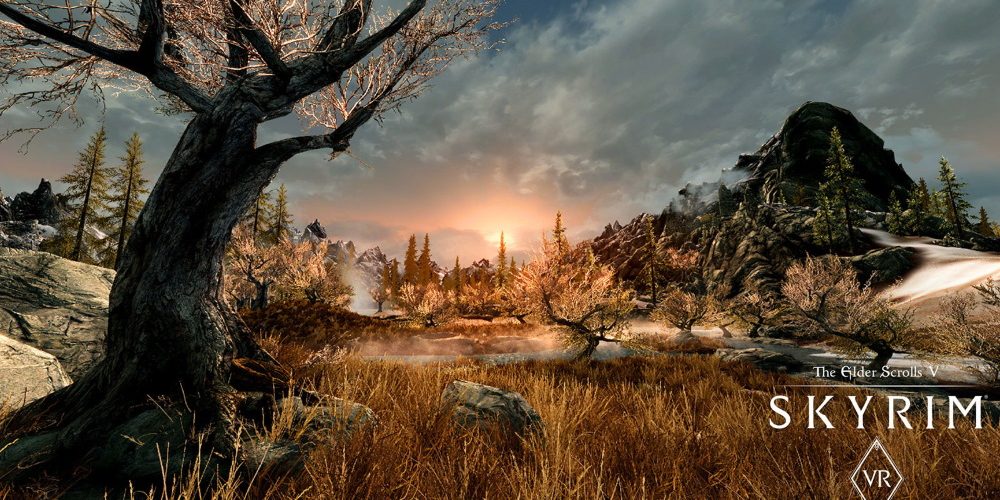 We live in an age when there have been many great technological leaps.

Since the introduction of virtual reality, avid gamers have been eagerly waiting for gaming experiences that would keep them hooked to their gaming zones for many hours.

In response to gamers’ disappointment over the very limited availability of VR gaming content, Bethesda decided to release ‘The Elder Scrolls V: Skyrim’ on VR.

Virtual reality allows you to be transported into a virtual world, simply by placing VR glasses on your head.

The VR world is fascinating since it lets you enter and interact in a different world without having to leave your comfort zone.

VR in Skyrim sounds like a fantastic idea because it has many tales and world-building elements.

The good news is that the VR version has no shortcuts or cut content.

The latest version has been tailored to suit the most recent input methods and to take care of the motion sickness that affects many VR users.

Skyrim is a well-known name in the industry. Since its first release, it has had many re-releases.

It is possible to easily discard some of the earlier releases,  by labeling them as money-making gimmicks.

However, with the release of Skyrim VR, it is clear that developers have introduced some valuable content.

It is one of the most played RPG of that period.

Skyrim has made its mark, by releasing the complete game on VR console and PC.

Enjoying an RPG on a flat screen is one thing.

Bringing the same experience to VR is a completely different thing.

We will look closely to determine if Skyrim has been successful in offering an immersive and fun VR experience with the latest release and which areas of the game could have been made better.

What is the Game About?

The success recipe for Skyrim is that it has adopted the open-world RPG formula, which is Bethesda’s domain.

What makes Skyrim remarkable, is its endless replayability.

here are 10 races to choose from and a completely open-ended progression system.

This allows you to play the game the way that you want.

The core game and its expansions offer users of hundreds of hours of gameplay.

Since the game is the original version loaded on the VR platform, it starts like the older versions.

You will be a nameless creature imprisoned in a fort with other rebels.

You have been mistaken as one of the rebels.

This is what motivates you in your struggle to escape getting your head chopped off like others.

You can create your character however you would like to.

There are many physical features to choose from.

Before you are killed, the whole situation is disrupted by the sudden invasion of dragons.

Recognizing this as a chance to flee, you escape from captivity.

Once you are free, you can do as you like.

You can choose to be a Dragonborn and follow the main questline.

You also have the options of joining the rebellions, entering the mage university or you settling along the riverbank, building a house for yourself and getting married.

You can even the option of becoming a vampire.

This gives you an idea of the wide variety of experiences that are offered in this game.

If you are familiar with the older versions, you will be aware that the game is full of distractions.

This includes dragons, dungeons, killing, loot, leveling up, stealing, and favor that are all parts of the game.

If you are new to the gaming world and haven’t played Skyrim before, you will learn that it is a deep RPG experience.

It gives you the freedom to do whatever you want inside the game.

You can choose different skills from the skill trees.

You can also invest your points for leveling up.

Your position in the gameplay is strengthened and improved, based on your performance.

If you pick many locks, your lockpicking skills improve.

If you set many things on fire, your destructive abilities improve.

This is true for every action in the game.

Each time the user can experience a different course and progress within the game.

This will be entirely different from everyone else.

The game has a rich story content and is off the beaten path.

An interesting part of the game is that if you choose to be a Dragonborn, you become capable of absorbing the souls of the killed dragons.

Along with their souls, you gain their knowledge and learn powerful spells in the dragon language.

As soon as you enter the VR version of Skyrim, you will realize that it is the same popular Skyrim game.

This also means there has been no change in the outdated graphics and its clumsy-looking characters.

Even the older versions were updated with several graphics and gameplay enhancements.

The best part is that all those modifications work in the same way with the Skyrim VR.

You shouldn’t forget that the latest release is based on a seven-year-old game, in a game world that progresses very rapidly.

Users may wonder while playing Skyrim VR, is why did the developers use the oldest version as the base instead of the latest 2016 re-release.

That version at least had a certain level of graphical sophistication.

Be prepared to see ground textures that look very stretched out and artificial-looking grass.

The ceilings may also be low in many places.

It appears that all the problems associated with previous Skyrim versions have been exaggerated with the VR release.

Character models and animations are not the same excellent quality as even in the older versions.

These things are too obvious and appear ugly in VR.

Everything becomes huge, which makes the flaws stand out.

As a result, the overall experience is slightly off.

If you have played Bethesda’s games in the past, you are familiar with the bugs that come with the game.

Be prepared to be punched into the stratosphere by a giant who shows up out of nowhere or for the dragons to suddenly vanish into the sky.

Skyrim has a great scale in both environments.

You might not realize the scale with the flat screen version.

However, in VR everything changes and becomes huge and immense.

It is a jaw-dropping experience to see the dragons towering over you or to have them perched on a wall.

The following is an example to help you understand the difference between the two experiences.

How would you feel if you looked at a photograph of a tall building or a tall mountain?

Now compare this experience with you standing right at the foothill of that mountain or skyscraper.

Wouldn’t you feel overwhelmed by the reality of this huge object?

Since it is an open-world RPG, Skyrim requires room-scale movement.

This can make some people nauseous.

If this bothers you,  it is possible to switch to the teleportation method.

This keeps forward movement to a minimum.

You must press the relative button on the controller to activate this mode.

You can rotate the protagonist in any direction, by using the face buttons on the controllers.

This can be done either in the smooth motion or with snapped interval movements to reduce motion sickness.

Teleportation is used as an alternative method of reducing motion sickness.

However, it comes at the expense of the immersive experience, which VR is known for.

Some people may find it to be a game-breaking experience when you can jump over tough areas in the game or reach behind your enemies and take them by surprise by just a click of the button.

However, it loses the very essence of the VR experience.

For gamers with a strong stomach, the normal mode or free movement is also available.

This provides the actual immersive feel of the VR.

You can switch to this mode by pressing the button on the controller.

You will now be tracked in accordance with your movements.

It is dependent on the user to select the controllers or the headset for motion tracking.

It is also possible to move backward, by pressing the designated button on the controller.

The controllers are well-designed for a virtual reality game.

There are some customization options that allow you to modify the game to suit your preferences.

VR allows you to raise your arm to shield yourself from attack by your rivals or to pull a drawstring to fire your arrow at an upcoming enemy.

This is very different from pressing buttons on a keyboard to perform the same actions.

Realistic swimming is the most interesting action since you must duck your head under the water and move your arms to start swimming.

The VR version seems to be lacking a modest improvement in the UI.

The menus look like floating boxes and have a non-VR appearance.

Subtitles appear similarly, with dialogue and NPCs floating away from the sides of the characters’ heads.

This is immersion-breaking and needs serious improvements.

Hopefully, this will become a part of later releases.

It is also difficult to navigate through the menus.

When you do this with the controllers, it is frustrating and unreliable.

Since the menus appear as two-dimensional displays, when the enemies are too close to you, they may come between you and the menus.

This can be annoying, since the enemies may end up blocking the content that is listed on the menus.

Skyrim VR on PSVR vs. PC

Skyrim VR, which was initially released on PSVR in November 2017, is a complete package that is very easy to install.

If you do not want to get involved with third-party programs on a PC, PSVR is for you.

You Just have to plug in a few cables and a camera and install the game.

That is all that is required.

If you do not already have something, you must buy the following:

You get all the DLCs with this version, including Dawnguard, Hearthfire, and Dragonborn.

The headset is comfortable, with an almost negligible screen door effect.

The controllers are the weakest point, since tracking with these controllers can be difficult and the button layout isn’t very comfortable.

Skyrim VR for PC is the latest version and was released on April 2018.

It is compatible for use with WMR, HTC Vive, and Oculus Rift.

The setup may take some time.

However, it wouldn’t require too much tweaking with third-party programs.

Windows Mixed Reality: Starting at about $400.

Oculus Rift and Touch: Starting at about $400.

If you already have a PC and VR system, you only need to pay for the game (about $60).

Otherwise, you could easily spend over $1,000 to get started.

The VR version for PC also comes with all the DLCs.

The graphics are a bit blurry in some spots.

However, it is much better than the PSVR version.

These blurry graphics can be improved by using mods.

Once you have the mods, you can change audio options, tune-up graphics and get new armor.

Skyrim, since it is an RPG, can be strenuous and exhausting.

This is because it needs constant standing or movement throughout the gameplay, which may last for many hours.

Bethesda has done an excellent job in providing an enjoyable VR experience at the lowest cost possible.

It is by far one of the best RPG in VR currently available.