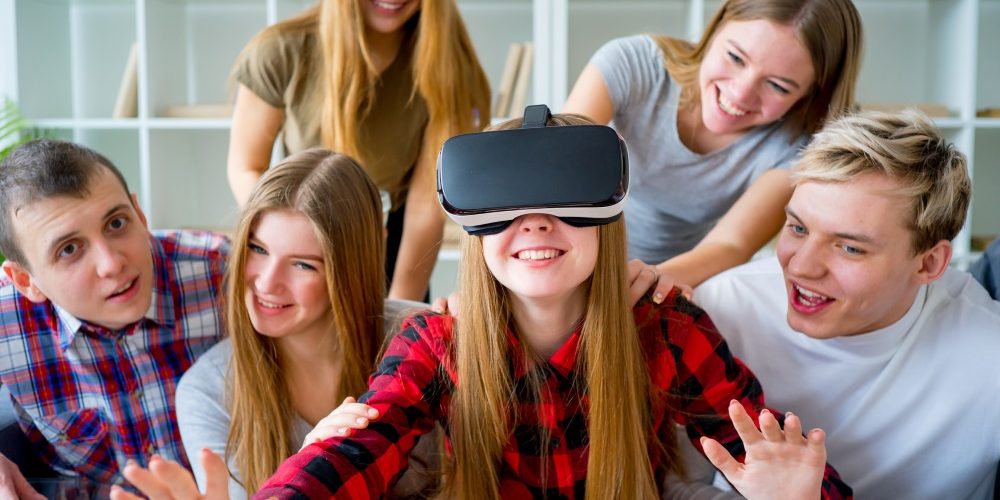 Now, comes the best part! The search for the best games out there.

They transport you into the ultimate fantasy world, where you get to achieve missions and enter dangerous territory, from a haunted house to a zombie apocalypse, while donned in your favorite pajamas, and within the walls and safety of your own space.

Check out the games that made our hot list and head right to the Oculus store to check more reviews!

Blast off some energy with Even: Gunjack, the game that lets you shoot, literally, everything that you can put your eye on.

This intergalactic pirate adventure graduates you into more challenging levels of fun.

An arcade treasure, this game is now available for $9.99.

Its price tag sort of tells you that you can get tons of hours of entertainment out of it.

It is worth the money and the time investment, so head to the Oculus store right now and own it today.

Become a Space Admiral in a game that combines strategy and campaign missions with a variety of spaceships to select from.

Just think of your favorite multilevel campaign challenges, much like the ones you play in war and military games, but applied to a space fleet that you will command and save from the enemy.

The modes for this game include multiplayer (play with friends) or Skirmish mode, which lets you create your own mission.

There is a total of 30 missions and 12 different types of spaceships.

These options are unlocked as you go.

You can own Skylight for $4.99. If you prefer to try out the game, commitment-free first, you can get a free version of it.

In this version, your options are slightly limited, but you still get the gist of the game.

You will be able to choose from 8 different spaceships, and you will also able to work on 10 campaigns, out of the available 30 that come in the full version of the game.

This is a turn-based platform, so every single strategy counts.

Who says you do not put your brain to good use while gaming?

Taste the horror of being trapped in a dark, deep dungeon with nothing but a tiny lamp that can barely help to light up your surroundings.

You have no weapons to defend yourself because you just woke up, not knowing how in the world you got there in the first place.

Did we mention that there is also a monstrous creature somewhere in there with you, lurking in the halls?

Oh, yes! And you need to figure out how to get out of there, too!

Like some of the best procedural-generated horror games in VR, Deadhalls brings you right into its multiple-layered settings featuring amazingly crisp HD graphics, atmospheric music, and ongoing goosebumps.

You will be scared, lost, confused, and more than ready to use your wits to devise an escape plan.

This rollercoaster of emotions can be yours for only $4.99.

You know you want it!

While this title sounds more like a greatest dance hits album from the late 1980’s, it is actually a superbly cathartic game that will take tons of stress out of your system.

It asks you to smash away your immediate surroundings.

You start off by smashing glass panels with a ball.

This is relaxing enough, especially on a Monday evening after everyone at work has tested you enough for one day.

Steadily, you will be asked to hit more targets, at a faster rate, to move to the next level.

Before you know it, you will graduate into quite the virtual vandal, smashing away more as you progress.

This game is atmospheric, with amazingly engaging graphics.

Want to hear the best news yet? It is mega affordable at just $2.99!

Get this game now!

Keep Talking (And Nobody Explodes), or KTANE

A catchy title that will have you on the edge of your seat, KTANE is a multiplayer, procedural generated challenge game.

Its goal is for you to pull a “Hurt Locker” and deactivate a bomb that a fellow Gear VR gamer will kindly present to you.

Unlike the movie The Hurt Locker, however, you will need to pay close attention to what your friends tell you to do because, alas, they have the deactivation manual.

As such, they will challenge you through a series of steps, some of which are more comedic than horrific.

Let’s just say that you will be deactivating a series of things, so you will need to apply very basic skills for this one: a) listening, b) following directions and, c) trusting the verbal directions of your fellow players.

While this title will take $14.99 out of your pocket, it also delivers tons of fun and entertainment.

It is still way less than a movie ticket, and it is a gift that keeps on giving.

Check it out today.

As a contestant, you get to solve puzzles, juggling items, and use your organization and categorization skills to figure out these not-so-simple challenges.

In the meantime, a virtual audience will be staring at you, listening to each and every one of your moves while they are narrated “on air” by the robotic game show host.

If you enjoy challenging your mind and taking time-tested problem-solving puzzles, this is the game for you.

It is every high-functioning thinker’s dream come true. Get it for only $4.99.

It is guaranteed to deliver super long hours of mind-bending entertainment that will help your brain become more malleable and ready for action!

Yes! A Kart platform for your VR gear, complete with a multiplayer option in a choice of Artificial Intelligence (AI), or red-blooded human challengers.

Like your traditional kart games, you get the same perks such as power-ups and a choice of tracks.

The game also features a single-player experience, a Championship Trophy Mode, different weapons to use on your opponents and, most importantly, kart customization!

Yes, you get to pick your own wheels, your own track, your own mode, goals, weapons, and challengers.

It is a total win! Therefore, VR Karts: Sprint will give you the rush you love.

You will be able to let out your daily stressors without the fear of getting a ticket or smashing your brand new virtual car.

Smashing the Battle is precisely all of that, and more.

In this game, you get to pick from two pretty, powerful and super cool, space age, amazing anime chicas.

These ladies are packing tons of laser heat and are not afraid to use it.

The girls’ goal is to take down some huge, rebel robots gone wild.

The multiple-battle activity is energy-pumping and filled with action-packed excitement.

It is irresistible fun for anyone who has ever played a multi-player battling game at any point.

The action is non-stop and full of fluid and crisp graphics. Not for the slow-paced, or the faint of heart.

If you are into atmospheric thrillers, with mind-bending situations and a hint of old-school horror, look no further than Dark Days.

Enter a creepy motel, and walk around a series of challenges to escape the different crazy situations that will come along the way.

It will make you scared, as you will jump at the bumps in the dark, and survive as best as you can.

You are at the center of the action, and the graphics will transport you for sure.

Think of the same type of suspense and fear factor you get from shows such as The Twilight Zone, Black Mirror, or The X-Files.

The game is sure to keep your attention for hours of entertainment.

At $7.99, this was rated as one of the most “visually complete game in VR,” so it is worth its price!

Get it at the Oculus store today.

Feed your inner child with a classical “find the hidden object” challenge.

This is no easy kiddie game, though.

It comes complete with a Norse mythology motif, killer graphics, and a pretty cool backstory.

Just remember: it is Loki we are talking about here. He is quite the volatile fellow.

Therefore, be ready to solve puzzles as quickly and accurately as possible before he loses his mind and the whole world pays for it.

You will need to collect parts of a magical horn, get rid of Loki, and engage in each of the challenges.

In the process, you get to discover other Norse mythology gods, listen to the soothing, voiceover of award-winning Michael McConnohie.

The biggest perk? You get to play as Thor! You are the God of Thunder!

In an additional note, know that this game won the Casual Connect Tel Aviv Indie Prize in 2016 in “The Best VR Game” and “Most Innovative Game” categories.

It was also an official selection for the Tokyo Game show of 2016 in the Indie area.

Not too shabby! The best part?

You can get all of that virtual reality goodness, and great atmospheric entertainment, for the incredibly low price of $2.99.

It is, in every way, a winning situation.

How could we not include Minecraft, the holy grail of all games, in the VR world?

Perhaps everyone who has ever touched a computer knows what Minecraft is by now.

If you do not, here is a little blurb on it: Minecraft is a game where players can create things and build places out of textured, pixelated cubes.

The mechanics of it include exploration, construction, crafting, and combat mechanics.

The VR layer adds a new dimension and perspective to the game, which immerses the player completely into the game.

It is productive, clever, and creative entertainment at the affordable price of $6.99.

All You Need to Know About Samsung Gear VR

You have been reading about the games, and perhaps you may not even own a Samsung Gear VR yet.

Do you know everything there is to know? Here it is! It may make a believer out of you!

It was developed by Samsung Electronics in collaboration with Oculus, and manufactured by the Samsung Corporation.

The imagery technology is transferred through a smartphone device, which is to be attached to the headset in a special compartment.

All the user needs to do is put the headset on, the same way they would wear a pair of big swimming goggles, and engage in the Samsung Gear games after launching the game’s application in the smartphone.

Since it is developed by Samsung, the smartphone needs to be compatible with the headset, so it should be also manufactured by the Samsung brand.

The current compatible models that operate with the Samsung Gear VR headset include the Galaxy Notes 5 and 8, and the Galaxy S/6, S/7, and S/8, including their respective Edge and Edge plus versions.

The first Samsung headset was released in November 2015.

To engage fully with the Samsung Gear games, the Gear VR also includes a touchpad and a back button on the side with sensors to detect other Gear VR users.

The collaboration with Oculus Home makes the latter the “headquarters” to download all content for the Samsung Gear VR.

The VR sets are sold anywhere that carries electronics.

This also includes every cellphone company that distributes Samsung phones that use their wireless services.

This means that the headsets can also be acquired through the users’ preferred wireless service provider.

Get your Samsung Gear VR set today and start downloading these, and many other games available in Oculus Rift.

As you can see, the games are a small price to pay for hours of engaging entertainment that is sure to never let you down.

This is your chance to do something truly extraordinary in your downtime.

Feel like a champion and let yourself go into the immersive world of VR.

It is perhaps the most fun you have ever had in a long time!