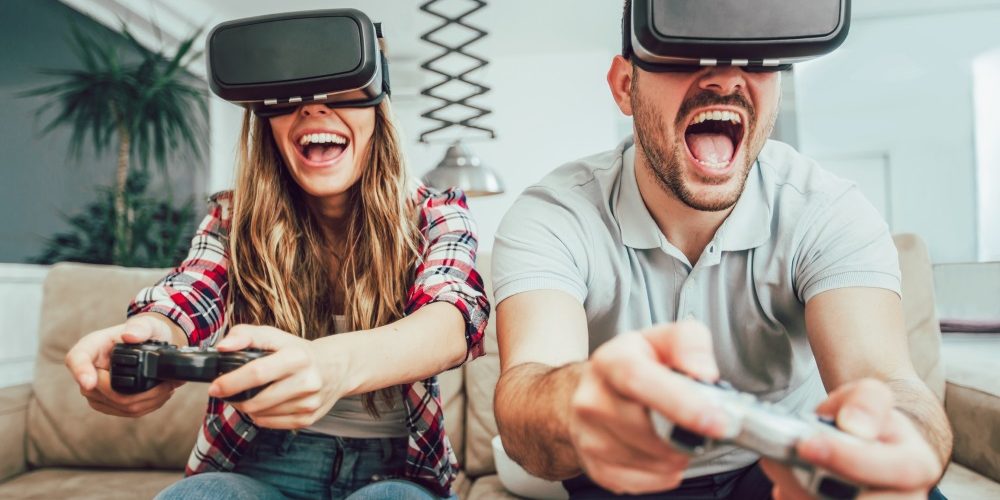 If you’re a flight junkie who has, or is planning to get, an Oculus Rift, there are a few must-have titles that take the experience to the next level.

Whether you’re soaring high above the rooftops or floating silently through the depths of space, a VR flight simulator provides an unparalleled level of immersion.

So let’s take a look at some of the best VR flight simulators available for the Rift.

If you’re after an immersive universe in which you can get lost, both figuratively and literally, then Elite: Dangerous is for you.

The game boasts a massive playing field, with over 400 billion star systems available for your exploration and exploitation.

If exploration isn’t your cup of tea, then you can also fight, trade, mine, and more.

The only real downside to Elite: Dangerous is that if you become invested in the game, you won’t have time for much else.

The basic premise of Eagle Flight is simple.

You become an eagle that is fighting to survive in a world long abandoned by mankind.

The controls are intuitive and simple, and the perspective of the eagle follows the movement of your head.

The setting is compelling: The streets of Paris that are overtaken by flora and fauna after the disappearance of humanity, thus returned to the wild primality of the animal kingdom.

It’s a unique experience set across a beautiful backdrop.

Rather, it’s a game about guiding planes safely from a distance.

There are numerous settings within the game, from the classic busy airport, where you assist planes safely to the ground, to handling emergency aircraft in a city stricken by disaster, to directing racing-planes through dangerous paths, to battles over aircraft carriers, and more.

The premise is unique and interesting, and the aircraft is controlled by using your motion controls to trace a safe course through the air.

If you’ve ever heard of EVE: Online, then this title might evoke visions of spreadsheets, accounting, corporate politics, and unfathomably massive battles among the stars.

Fortunately for many, Valkyrie only includes the battles.

Valkyrie is a game of high-octane dogfighting action. You can hop into the cockpit of three different ship classes, and take on massive fleets of powerful spacecraft.

If you find EVE’s story compelling, but would rather be a fighter pilot than an accountant, this game is for you.

But you don’t need to know the story behind EVE to enjoy blowing up spaceships.

If you want more dogfighting, then it doesn’t get more visceral or adrenaline-soaked than the crowded skies of the Second World War.

There are dozens of different aircraft into which you can step, each with a beautifully-detailed cockpit.

There are game-modes ranging from simple arcade battles to blisteringly realistic simulated warfare.

Planes also aren’t your only choice, as both tanks and ships are available, as well.

But the most impressive feature of this VR flight simulator is the fact that it’s free.

FIRMA is a game about making deliveries on the moon.

You pick up packages and drop them off.

Your lunar lander handles elegantly, and racing through the canyons and craters of the moon is an exhilarating experience.

However, everything isn’t as it first appears, and it won’t be long before you’re completing shadier missions for your employer; you may even be forced to destroy other lunar landers, with the cannons mounted to your sides.

There’s a wide variety of tasks for you to complete, and the action can increase in intensity quickly.

What is the Oculus Rift?

The Oculus Rift is a VR headset developed by Oculus VR.

It’s paved the way for modern VR gaming, with its advanced technology.

The headset connects to your gaming PC or laptop directly, allowing you to play Oculus-compatible games with ease.

High-resolution dual-lens technology makes it seem as if you’re really in the game.

The Rift has solid construction, but that doesn’t mean it’s heavy or awkward.

Made of lightweight materials and with a design that incorporates both comfort and adaptability, the Rift is designed to be a hassle-free wear.

Its weight is distributed intelligently and evenly across your head, making the device seem almost to disappear when you become absorbed in the VR experience.

We wouldn’t describe the Rift as elegantly- or artistically-designed, but it is intuitively so, for maximum utility.

The Rift does its job well, and that is dropping you into your own virtual world while doing little to take you out of the experience.

This is incredibly apparent in the design of the newest Rift model, from the reduced screen door effect to the more ergonomic design.

One of the Rift’s recent innovations is its new controllers.

Gone are the days of struggling to immerse yourself in the game while using a standard gamepad.

While not quite un-noticeable, the new Oculus Touch controls offer ergonomic design and an impressively intuitive control scheme.

The controls are easy to learn, and can provide a richer, more fulfilling VR experience.

They’re especially useful in games such as Final Approach, where motion controls are mandatory.

However, in some games, such as War Thunder, it may be more natural to use a joystick, if you happen to have one.

Oculus knows that hearing is almost as important as sight, and to address this fact, they’ve developed an integrated audio system which provides full, 360° spatial audio that vastly improves immersion.

No longer will you have to contend with flat-sounding games or lackluster headphones.

I think we can all agree, by this point, that sound is an important aspect of the VR experience.

But there is still one important question left to ask: When will we get immersive VR smell?

The Oculus Rift is a powerful device for immersing yourself in a game world, and provides you with a platform that supports hundreds of games and experiences, both with and without motion control.

It features comfortable design, impressive audio, and a bevy of other useful features that can take your experience to another level.

Out of all these options, few are more immersive and exciting than flight simulators, which place you in the cockpit of a plane or spaceship, or even on the wings of an eagle.

If you enjoy the experience of flight and have an Oculus Rift, or if you’re on the fence about whether or not VR is a worthy investment, then we encourage you to take a look at some of the games we discussed today.

We are pretty excited to see what Oculus comes up with next, and, more importantly, what game developers create to take advantage of it.