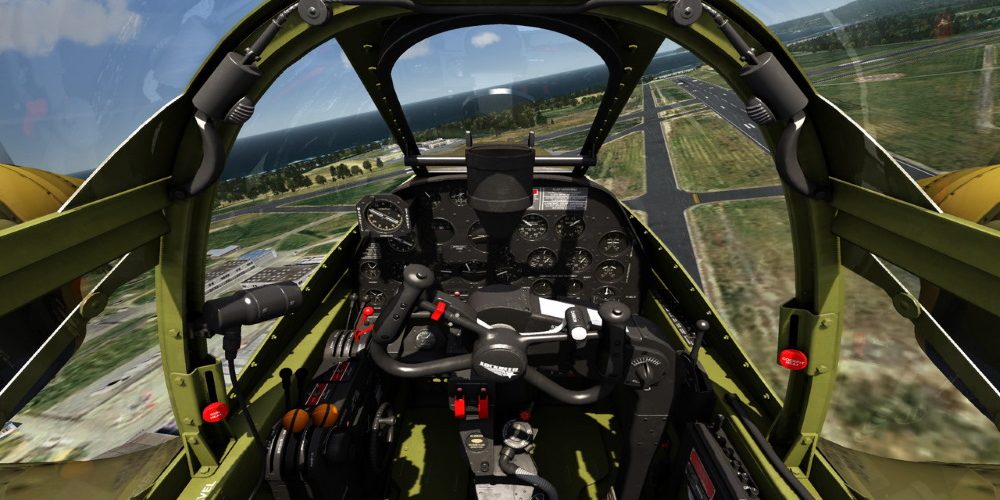 Flight simulators are one of the best and most exhilarating experiences in VR.

It allows you to be in complete control of the flight and to soar in the skies.

It is by far the most realistic flight experience other than being a pilot.

In the early 2000s, flight simulators were first introduced on XP in a PC using a joystick and pedals.

VR has completely changed the game. Now the same flight simulation can be experienced more realistically.

The flight simulation in VR takes you beyond the screen into the enticing world of the cockpits of commercial airliners, helicopters, combat planes, and even spacecraft.

Many young people have thought that the ability of pilots to fly an airplane is heroic.

Many of us have dreamed of becoming a pilot and flying around the world.

Unfortunately, time and money constraints have often shattered these dreams.

Flight simulator in VR is a chance for all these flight enthusiasts to enjoy this experience firsthand.

We have compiled a list of some of the best VR flight simulators.

However, before moving ahead with the list, it is necessary to discuss some important points.

These things are not an absolute necessity.

However, if you really want to enjoy VR flight simulation, you should plan, save and invest in these goodies.

A computer is the heart of the complete system.

You need to get a computer that fits your budget but doesn’t compromise your flight simulator’s performance.

A fast CPU is a must since it allows you to have planes, buildings, trees and all the other objects that you can imagine that make things more realistic.

It is also necessary to select a powerful graphics card.

At this point, please bear in mind that the complete VR setup is on the expensive side.

Flight simulation is on the higher end of VR in terms of cost.

Even a budget setup will be relatively expensive and will require high-end products, compared to other setups.

VR headset is an integral part of the VR setup.

You can choose from two leading brands; the Oculus Rift and the HTC Vive.

Both of these headsets have loyal customers for valid reasons.

You can do your part of the research and choose your most suitable option.

This is not considered essential.

However, it can improve the flight simulation game.

You can do without adding the yoke to the system since a mouse, keyboard and joystick work well.

If you want to get the real feel of flight simulation and can afford it, invest in a yoke.

When you are flying, you cannot see the outside world.

These are similar to the yoke since they aren’t an absolute necessity.

Most flight simmers forget about adding rudder pedals to the system.

However, if you take this seriously, consider adding rudder pedals to your simulation system.

Now that we have discussed much of the important stuff, let us dive into the actual juicy content.

The following is a list of some of the best VR flight simulators.

Each one offers a different type of experience.

Choose the best one and get ready, get set, go!

It has amazing designs and exceptionally well-designed planes, airplane terminals, and flight controls.

The 3D cockpits are interactive with buttons, switches and handle all working and can be utilized with the pilot training program.

There are several planes you can fly or try to fly.

There are also more than 150 air terminals to land and take off from.

The breathtaking views are a pleasant addition to the whole experience.

At some point, you will be tricked into believing that you are flying a real aircraft.

The flight physics are as close to real as you can get.

This can make it a superb method to prepare for genuine flying.

If you need a hyper-practical flight sim, the Aerofly FS 2 is the best choice.

If flying around Earth is too bland for you, Lunar Flight will place you in a 1960’s Lunar Lander.

It lets you complete missions as a virtual pilot on the moon.

You will be faced with the thrill of just having seconds of fuel left, and being just a foot away from slamming your rocket into the lunar surface.

The cockpit is small and the windows are difficult to see out of.

However, the astutely structured navigational framework helps you land your lander.

Getting acclimated to the flight controls and physics takes some time.

Once you get the hang of it, you’ll easily finish the adventure.

You’ll need to make sure to watch the fuel level, vector, direction, and remember that there isn’t any force which might back you off.

If you are looking for combat against some WWII or Korean War vehicles and aircraft, War Thunder is for you.

You might find the cockpit controls and physics of the aircraft not as advanced or sophisticated as those of other games.

However, it is still a good choice as a flight simulator.

War Thunder comes with a story which allows you to battle against others.

There are hundreds of tanks, vehicles, and aircraft to fight against each other.

If you find flight simulators a little slow for your taste, War Thunder might generate some excitement for you.

You will be assigned missions and goals to accomplish while flying from one place to another.

The best thing about this flight simulator is that it is free to download.

DCS world is a digital combat simulator, which with a focus on the flight.

Although there are other vehicles, like tanks,  the game mainly revolves around flying.

The 3D cockpits have an amazing design with realistic controls.

The weapons give it a nice twist. Who gets to work with bombs and missiles in everyday life?

Since the game is free, it comes with only two aircraft to try your hands-on flight and combat simulation.

If you can spare a few dollars, get DLC which offers a larger variety of aircraft and other vehicles to choose from.

It places gamers in the cockpit of the most exceptional warplanes and conveys a very ﬁerce air battle experience.

Through photorealistic visuals, extraordinary ﬁghting activity, a huge number of bona fide and cutting-edge airplanes to ﬂy, a vivid storyline and virtual reality, Ace Combat 7 has been one of the favorite flight simulators.

Utilizing the intensity of the most current age gaming, ACE COMBAT 7 will impress players with its advanced graphics engine.

Very realistic cloud-ﬁlled skies and exceptionally point by point cityscapes enhance the feeling of unparalleled speed and set the scene for the most captivating flying fights in the game’s storied multi-year history.

Expert COMBAT 7 offers a huge collection of the most sophisticated weapons and enemies, which are sure to make the game even better.

The impressive features include an instinctive user interface, 3-D cockpits, and 3-D sound an overall landscape.

X-Plane 11 has a purpose-built effects engine for lighting, sounds, and blasts – and above all, it supports virtual reality.

A totally updated, natural user interface that makes setting up and altering your flight incredibly easy.

All planes are IFR-read, right out of the gates.

X-Plane 11 comes with busy airports, pushback tugs and roaming fuel trucks that add to the realism of the whole experience.

These roaming fuel trucks are able to service your aircraft, as well as any other planes in the simulator.

New landscapes have been added to depict the buildings and streets of Europe.

Have you ever wondered what it is like to become a Navy pilot?

Flying Aces is here to answer all your questions and satisfy your curiosity.

Flying Aces requires a combination of skill sets, including hand and eye coordination, quick decision making, and a tough stomach.

It is a story-based flight simulator.

You will start off as a low-ranking officer and learn the functionality of an F-18 Super Hornet.

The game progresses and becomes challenging, as you get promoted to higher ranks.

The experience takes you through take-off mission, harrowing carrier landings in the storm and targeting enemies and shooting missiles.

In addition to aircraft, flight simulators are experimenting with flying other vehicles.

VR Flying Car Flight Simulator is one of its kind since it gives you the immersive experience of flying a car.

You can look outside your car window, left, right, back, front and below.

It lets you ride through trees, streets, mountains and almost all of the virtual world.

You can even experience flying above an ocean.

This is the best flight simulator for all three-dimensional VR headsets.

It requires at least Android 2.3.

Space Force is one of the most realistic looking games available.

In Space Force Virtual Reality Rogue Defender, you are required to complete tasks and missions assigned to you, including guarding the universe.

This is one of the best flight missions you can go on, without leaving your room.

There are many dimensions for playing this game, with a scoreboard that monitors everything you do.

There are different planned assignments and various protector missions on this game that you can help you earn points and win.

You can also shoot laser firearms at rivals you run over and get an incredible 360 VR FPS field of view.

You can appreciate an interminable world in space with continuous shooting, as you fly your plane in this sensible flight simulator.

Pilot a warrior in space and get a genuine rush, as you experience the genuine vibe of being a space contender.

All you need is your VR headset, with a field view of 360 VR FPS.

You can look north, south, east or west or wherever you need to fly your warrior.

Just pull the trigger and keep away from all threats.

This is a standout among the best flying simulator applications for VR.

It is compatible with most 3D mobile VR simulation headsets and requires Android 4.4.

It lets you sit inside the body of an eagle, instead of an aircraft or any other vehicle.

You can enjoy soaring through the skies of France.

The views are exceptionally breathtaking, as you fly above man-made creations, like high-rise buildings, monuments, and bridges.

The details and graphics in this game are commendable.

The most interesting aspect of this game is that it has a multiplayer option.

This takes things to the next level, as you get to compete with others in order to win.

You must dodge high-rise monuments and fly under bridges.

Otherwise, you might crash into one of them. It is one of the best PS4 VR flying games.

This list has been compiled keeping in mind that everyone has different preferences.

This list has serious flight simulators that might be helpful in the actual training of flying an aircraft, as well as some games that provide pure entertainment to the users.