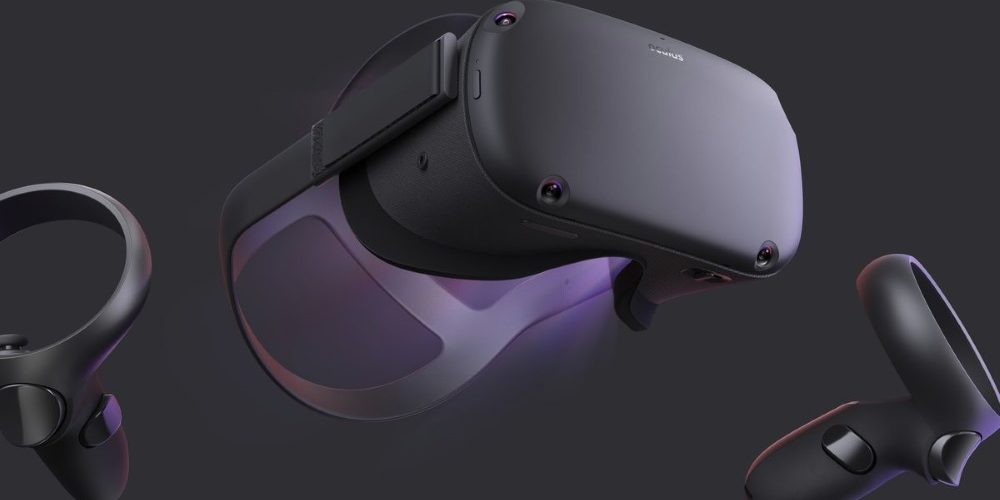 After a long string of skeptical behavior towards the lagging virtual reality industry, Oculus has yet again awed everyone with its latest release: The Oculus Quest.

This is a prime example of the fact that Facebook will not back down from investing billions of dollars to develop quality VR hardware.

No more teasers, no more rumors and leaks; the real thing will be shipped in the spring of 2019.

One of the top features of the Oculus Quest, which also plays a part in building the hype around the new VR headset, is its six degrees of freedom (6DOF) and inside-out tracking system.

Nonetheless, being wireless and not requiring external sensors is also a huge win for Team Quest.

Not needing to be tethered to an expensive computer, despite having a Rift-like tracking system (even better than that of the Rift; we’ll talk about that below), makes the Oculus Quest capable of being a worthy alternative to tethered VR headsets, unlike the Oculus Go, which sacrificed a lot of perks just to be a standalone VR headset.

In this article, we have compiled just for you everything that we know about the new Oculus product.

eep reading to get an in-depth breakdown of the Oculus Quest.

As you will soon see, there is A LOT to talk about in the standalone VR headset.

Due to the way the Oculus Quest has been described, it has confused many about the question, to which ecosystem does the new VR headset belong?

Yes, it is a standalone VR headset like the Oculus Go, and yes, it shares a lot of useful features with the Oculus Rift.

However, the Oculus Quest is an entirely new headset in and of itself.

It will have its own niche; it performs far better than the Oculus Go, but it doesn’t require tethering like the Oculus Rift.

Think of the Oculus Quest as a hybrid, or a balance of all the good features from both of the other VR headsets.

The Oculus Quest will have its own content library, which may or may not include every application built for the Oculus Rift.

You should also know that the Oculus Quest will not feature a mirror of the Gear VR’s content, as the Oculus Go does.

The Oculus Quest games that were first released for the Oculus Rift will be direct ports similar to, for instance, how a PS4 application is ported to the Xbox One.

The Oculus Quest Has a Similar, Yet Different Tracking Mechanism than the Oculus Rift

One of the Oculus Quest’s top features has always been its 6DOF tracking system, which is a huge step up from the Oculus Go.

If you don’t understand degrees of freedom, here is a simple explanation: 3DOF stands for rotational freedom (one degree for rotation in each axis – X, Y, and Z), which allows you to manipulate your 3D view when you tilt or rotate your head.

Six DOF builds upon that rotational freedom, and gives you freedom of movement.

This means that, when you move your head forward, backward, up, down, left, and right, the device will simulate the same movements in the 3D world.

Where 3DOF allows you to look here and there, 6DOF gives you the ability to peek around corners, or over the cover you are in, and to dodge spells cast toward you.

The immersion of a game with 6DOF tracking is far greater than that which you get with 3DOF hardware.

The Oculus Rift was notably successful in delivering an accurate 6DOF tracking system.

The same capability is offered in the new standalone VR headset, which is why they say that it has “Rift-like tracking”.

However, the Oculus Quest deploys a 6DOF tracking system, which is even better than that of the Oculus Rift.

The Oculus Rift achieves 6DOF tracking with the help of external sensors that you have to place around the room.

These sensors track your headset’s movements, and then translate them into the game.

The Oculus Quest, on the other hand, has wide-angle sensors placed on each corner of the headset’s front.

Instead of tracking your movement like the external sensors do, these built-in sensors read the space in front of you to plot out the room.

When your headset moves, the distance between obstacles (like the wall of your room) will change; this will be detected by the sensors, and get translated into the game.

This unique and extraordinary inside-out tracking system is titled “Oculus Insight”, and also acts as a guardian system that can help you avoid bumping into obstacles like tables and chairs.

The capabilities of the Oculus Insight allow the headset to store tracking information from multiple rooms or large halls, such as a VR shooting arena.

The Oculus Quest’s controllers are among the best you can get on the VR market today.

When talking just about standalone headsets, the Quest’s controllers are hands down the most immersive.

The Oculus Quest features a newer version of the Rift’s Touch controllers, and the ecosystem is capable of seamlessly tracking the movement of your hands, as long as the sensors can get a line on them.

This particular feature doesn’t exist in most of the standalone VR headsets.

The Quest’s controllers have face buttons, grip buttons, triggers, and analog sticks to receive input from either hand.

Also, the tracking ring on the Oculus Quest’s Touch controllers is modified so that it now extends over the top of the controllers, instead of under them.

This allows better visibility of the controllers’ movements for the inside-out tracking system we just discussed above.

Exactly How Powerful Is the Oculus Quest?

The Oculus Quest is quite powerful.

It was revealed right after the keynote that the Oculus Quest will be powered by Qualcomm’s Snapdragon 835 mobile chipset.

Now, the Qualcomm Snapdragon 845 is the latest and the most powerful mobile chipset made by the company, but its predecessor is not far behind in terms of performance, either.

Apart from an estimated 25% boost in processing power, and up to a 30% reduced battery consumption, there isn’t much difference between the two chipsets when they are compared for use in VR headsets. Here is an interesting in-depth comparison of the two chipsets.

Even though the Snapdragon 845 is a better mobile chipset than the 835, you should also consider the fact that the 835 is going to be used for VR only, which will dedicate all its processing power to a single system.

An 835 in a VR headset will yield an equal, if not better, performance to that of a Snapdragon 845 chipset powering a top-tier smartphone, as its processing power has to be distributed between several systems, such as GSM, signal processing, camera, background applications, LTE, and of course, the Android operating system, which itself is a very heavy application.

Compared to the Oculus Go’s Snapdragon 821, the Oculus Quest is much more powerful.

This difference will result in better graphics, a much more serious gaming experience, and better overall gameplay mechanisms in the games developed for the Oculus Quest.

It is highly probable that a lot of the Rift’s games will also be ported to the Oculus Quest; don’t, however, expect the Rift’s heavy-duty games to arrive on the Quest.

Since the Oculus Rift is tethered to a PC, the configuration of the PC defines what games you can play.

The better your PC, the more processor-hungry VR games you can play on the Rift.

On the Oculus Quest, you can’t connect a heavy-duty PC to play games that are beyond the Snapdragon 835’s processing limitation.

Don’t let this get you down, though; the Oculus Quest will receive a number of the Rift’s experiences – even if in stripped-down graphics – and has a number of exciting games in its lineup, with more on the way.

The awesome news about the Oculus Quest’s content is that Mark Zuckerberg has promised at least 50 titles ready by its launch date, which is sometime in the spring of 2019.

The full list of available VR applications will probably be revealed during its launch.

During the presentation  event, it was revealed that a few popular VR titles like Robo Recall, The Climb, and Moss, will be ported to the Oculus Quest.

A number of games and VR experiences were also set up during the event for lucky visitors to try.

The objective of these VR experiences was to show the world the difference it makes when you go wireless in a virtual world.

Take Tennis Scramble, for example; this cartoonish and colorful VR game would have been impossible to enjoy on the Oculus Rift, because you’re connected to a computer, and moving too far from the computer would have had catastrophic results.

On the Oculus Quest, however, it’s a completely different story.

Players could practically shuffle about a real-sized tennis court with an Oculus Quest, without any worry.

A prime demonstration of the Oculus Quest’s new inside-out tracking system was seen in Oculus’ shootout VR title’s arena-sized activity, where two teams rained down hell on each other in an old western-style train station.

The Oculus Quest will have a price tag of $399, which is exactly the same as the Oculus Rift’s and double the Oculus Go’s prices.

You may think that it’s absurd for Oculus to price a standalone VR headset so cheap, but when you consider the Oculus Rift’s costs, the price will make sense.

With the Oculus Rift, your total price isn’t just the $399 that you pay for the headset and its gear; you also need to have a pretty expensive PC, to be able to play the serious games released for the Oculus Rift.

A VR-ready PC costs at least $800, and even then, you’ll have to shell out around $600 more to get the best performance.

In this sense, an Oculus Rift costs you way more than its $399 price tag.

An Oculus Quest, on the other hand, costs you no more than its sticker price, as you don’t need an expensive PC to process VR applications.

The Oculus Quest is thus more affordable than the Oculus Rift for most gaming hobbyists.

Hardcore gamers, however, would beg to differ.

I’ve said it above, and I’ll say it again: The Oculus Quest is a remarkable balance between two VR headsets of different classes.

It’s marginally more powerful than the Oculus Go, but not as much as the Oculus Rift can be; it beats, however, the Oculus Rift, with regard to extra hardware, standalone function, a better 6DOF tracking system, and upgraded Touch controllers.

Its price is way higher than that of the Oculus Go, yet it’s far more affordable than the Oculus Rift, after accounting for the PC that you’ll need to use the Rift.

The Quest may not be the best VR headset for gaming fanatics, but it would still deliver a lot of great titles that are worth playing.

Plus, it’s much more portable than a tethered VR headset, and doesn’t need an external sensor setup, either.

One thing that I am dying to see (and that you should be, too) is the Oculus Quest’s use in large gaming arenas.