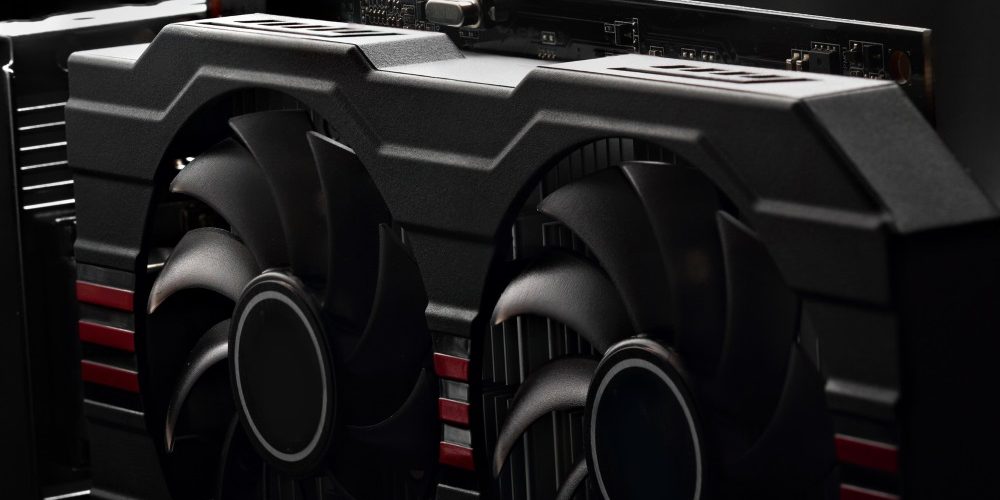 With the resurgence in popularity of high-quality VR tech, it’s clear that virtual reality is here to stay.

Whether you have experienced a VR headset for yourself, and crave its full immersion into a game world, or are just dipping your toes in the realistic waters of Skyrim, your graphics card is going to be the critical component in your VR build.

There are as many graphics cards on the market as there are VR titles to choose from, and we’ve put together a user-friendly guide to help break down which one will be the best for you.

We’ve sorted the options into three simple categories that will help you narrow down which video card is the best for VR.

Why Does My PC Need a Powerful Graphics Card?

While many applications can run in a wide range of settings and resolutions, popular VR headsets have very specific resolution and FPS needs that must be met.

Both the Oculus Rift S and the HTC Vive Cosmos use a resolution display much higher than the usual 1080p.

By comparison, most games are considered “running smoothly” at 60 FPS on a 60 Hz screen.

This high refresh rate and wide resolution demand a high level of performance from the graphics card.

Running a 2560 x 1440 screen at 90 FPS is already a hefty task for the GPU; start adding in high graphics settings in the in-game menu options, and you will be quickly taxing the budget GPU to the point where you will see performance issues.

And this will completely ruin the VR experience, as will ultra-low game settings.

It’s not so fun to have your immersion in a 3D world broken by a bunch of jagged edges and poor graphics.

For these reasons, it’s critical to have a graphics card that’s up to the task of running smooth, high-settings VR applications.

Let’s take a look at what the best video card for VR at any budget is going to be.

AMD’s follow-up to the still-popular RX 480, the RX 580, is a powerhouse budget CPU that will handle most VR titles on respectable settings without any noticeable frame rate lag.

Based largely on the previous RX 480’s Polaris architecture, the RX 580 has some clear advantages over its predecessor.

AMD states the only major change made to the RX 580 is in the unit’s silicon to allow for higher clock speeds.

That’s a significant improvement over the already-strong performance of the RX 480.

On paper it’s very close to the mid-range option on our list, the NVIDIA GeForce GTX 1060, and is a stellar choice for an entry-level VR rig.

It’s just about the least expensive card that will pass the recommended specs for today’s VR headsets.

It comes with AMD FreeSync, and will handle high refresh rate HD gaming with ease.

AMD offers this card in both 4GB and 8GB memory setups, but for first-time VR adopters, the 4GB will do just fine.

Where the RX 580 begins to fall behind is in resolutions above 1080p, making it a less-versatile card than the GeForce 1060, against which it was aimed to compete.

It starts to dip below the 60 FPS sweet spot when running in QHD (1440p) or higher resolutions.

Despite this shortcoming, the RX 580 is a solid choice for VR gaming on a budget.

It’s less expensive than the 1060, and when considering just VR, performs at a similar level.

Listed as a recommended card for the Oculus Rift, the GeForce GTX 1060 is a great middle ground for those looking to get into VR.

Not only will it handle VR gaming with ease, it consumes much less power than the above-listed RX 580.

The downside here is that it costs a little more, though their performance is still similar, but in general the GTX 1060 performs better than the RX 580.

As an added bonus, it’s G-Sync ready, a monitor technology that is quickly becoming popular, and that offers high-definition panels to help sync refresh rates to FPS for a smoother gaming experience.

Sold in both 3GB and 6GB configurations, either one will suffice for VR gaming.

A versatile card that can handle both high performance wide resolution gaming and VR, the GTX 1070 is just above the price that would put it in the mid-range category.

Boasting impressive specs without costing a new mortgage on your home, this card includes a moderate amount of future-proofing, as gaming trends towards the QHD resolution and beyond.

It can handle 4K gaming, though it won’t run 60 FPS on maximum settings in that resolution.

Overall it’s a well-rounded, high value card that will run VR applications beautifully and without any stuttering.

The most expensive card on this list by far, the GTX 1080 Ti is at the top of the list for gamer-focused graphics cards.

Not only will the GTX 1080 Ti flawlessly handle VR gaming even on the highest settings, it’s one of the only cards currently on the market that can boast a smooth 60 FPS for 4K gaming on maximum settings for most titles.

It’s a gaming monster, and if you have the cash to spend, it will provide you both with a range of gaming options and with years of future-proofing for your system.

What is VR and How Does It Work?

Put simply, virtual reality, or VR, is creating an immersive experience through the use of unique displays and technology.

Sometimes this can include more than just the visual sense; the best VR applications tend to combine sound, sight, and touch into one comprehensive experience that will make users feel fully immersed in the world the developers have created.

Some titles take advantage of VR even if they weren’t originally intended to do so.

One of the best examples of this is 2011’s The Elder Scrolls: Skyrim, which can be configured using special software on the PC to run in VR.

It was often used as a demo title for certain VR headsets to show off what the devices were capable of.

The first time a fire-breathing dragon swoops down over your head, causing you actually to duck, the power of VR is clear.

Other titles are made from the ground up to be used with VR technology.

These titles take special considerations into their original design, such as the graphic requirements and presentation, to present the most immersive VR experience possible.

Often they use VR motion controllers to simulate further the VR experience, linking your hands to in-game actions to give a more tactile experience.

The recently-released Star Trek: Bridge Crew brings players into the world of Star Trek, and is designed to be used exclusively with VR technology.

Not all VR experiences are games, either.

There are movies and graphical experiences being designed specifically for VR.

This allows for creators to bring much more real experiences to life in your home.

The possibilities for VR are many, and every day designers are coming up with new ways to take advantage of the technology.

But how does it work?

In a basic sense, VR can simply be two nearly-identical screens placed very close to each eye, in order to create a stereoscopic view for the user.

Even this presents its own unique challenges, and VR headset developers have gone to great lengths to circumvent them.

Presenting the user with a stereoscopic screen has to be a very dialed-in process.

The human eye tends to be very good at noticing small imperfections.

Minor issues like screen tearing are an annoyance on a monitor; in a VR headset they can be physically nauseating.

Likewise, the headset response rate has to be accurate; early headset developers spent years perfecting the rate at which their headsets respond to head movements.

They found that when the headset lagged behind the user’s head movements by too much, users would quickly become disoriented.

A VR headset is generally a fully-enclosed device that blocks out the outside world for the user, so nailing down these seemingly-trivial annoyances was a big deal in making VR tech viable.

Many VR developers have also made special controllers with which to play games.

These motion controllers let users relinquish traditional game controllers and allow themselves to become fully immersed in a 3D world.