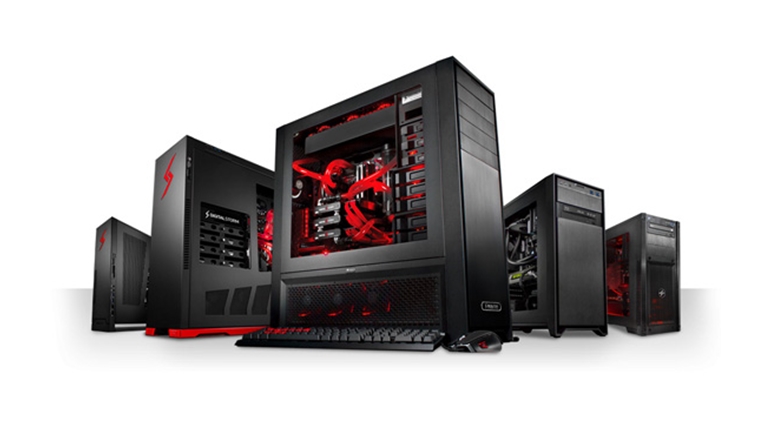 You’ve gone to a store and taken a demo or visited your friend who’s always got the latest and greatest toys.

You’ve been immersed in the incredible experience that virtual reality provides.

It’s now time to take the plunge and build your own VR ready PC, and you’re not sure where to start.

In order to get the most out of that shiny new VR headset, some serious hardware is going to be sitting under the hood of your desktop.

We’re going to lay out exactly what you’ll need for your new VR rig, including a few example components, to help demystify the hardware required to experience VR.

We’ll also take a look at some pre-built options and weigh the pros and cons of each.

Once you’re finished reading this article, you’ll have all the tools you need to get started on climbing Mount Everest or lurking through a dark hallway in a seamless VR world.

What’s So Special About VR Desktops?

Put simply, VR headsets require the high performance from the machines they are connected to.

A setup that handles high-definition gaming without issue may struggle to provide a smooth VR experience.

Headsets like the Oculus Rift and the games that go with it are particularly demanding on the system’s graphics card.

Even mid-range cards can get bogged down by the demands of lag-free VR.

The key here is that a quality VR experience needs to be completely free of any visual lag.

Due to the way the headset is designed, the proximity to your eyes, and the nature of the experience itself, even the slightest bit of framerate lag can completely ruin your VR immersion.

While framerate lag can be an annoyance in traditional gaming with a monitor, it can be disorienting when wearing a VR headset and disconnect you from feeling immersed in a VR world.

Primarily for this reason, it’s important to choose components that exceed the minimum requirements laid out by headset manufacturers.

Compromising the fidelity of the visual experience completely defeats the purpose of using a VR headset in the first place.

It’s possible to cut some corners in your build if you’re on a strict budget, but graphics and processing in particular need to be paid careful attention.

Coming up short in either of these areas is a sure fire way to be disappointed in your VR purchase.

The beating heart of your VR ready PC, we’re going to go piece by piece and look at the recommended requirements laid out by the popular VR headset manufacturer Oculus.

We’ll take a look at a few different options for your rig and point out some recommendations for different budgets.

In an attempt to make VR ready PCs more accessible, our list of components will include both the top of the line options for certain categories as well as less expensive solutions that will still run a smooth VR experience.

This is the one component where you absolutely cannot cut any corners.

It’s likely going to be the most expensive piece of hardware in your build regardless of the budget; expect to spend at least $300 on your setup’s graphics card, and that’s for the bare minimum.

If you’re interested in getting the latest and greatest rig or want to future-proof your system, it’s easy to spend upwards of $600 on this component alone.

Also keep in mind that, depending on your ideal setup, you’re going to need a motherboard with enough available slots to fit whatever card you’re purchasing.

Adequate cooling also needs to be a consideration, as more powerful setups will need more powerful fans or even a liquid-cooling system.

To put things simply, the more you spend on your graphics card the better your system will be – but the more you’ll need to spend more on your other component parts as well.

Keep this in mind when planning out your build!

At the top of the list for graphics cards, the GTX 1080 Ti is a beast of a card that outpaces nearly every other GPU currently available.

Outside of the Titan cards, which will cost you as much as an entire top-of-the-line PC all by itself, there aren’t many cards that can compete with the 1080 Ti.

With 11 GB of dedicated video memory, huge amounts of memory bandwidth, and the new PASCAL architecture, the GTX 1080 Ti is quoted by NVIDIA to be three times faster than last generation’s cards.

Not only will this card easily handle the demanding graphics requirements of VR gaming, it will gleefully process 4K HDR gaming at high monitor refresh rates.

Throw in NVIDIA G-Sync support, SLI support, and a host of input/outputs, and you’ve got a future-proof card with the room to grow with your system’s demands.

Running at about half the cost of the above-listed GTX 1080 Ti, the AMD Radeon RX580 will cost less than the Oculus recommended GTX 1060 and have roughly the same performance.

These two cards go blow-for-blow on live tests, but the RX580 will be about $50 less on average.

That being said, if you’d rather have an NVIDIA card either one will handle high-setting VR gaming.

Picking between these two will mostly come down to preference and availability.

If you already have a monitor that utilizes FreeSync tech, you’ll likely want the AMD, and vice versa for G-Sync.

The AMD card has 4GB and 8GB versions, and the NVIDIA comes in 3GB and 6GB configurations.

In both cases, the lower memory amount is appropriate for a smooth VR gaming.

The CPU market is currently very competitive, and that greatly benefits the processor options in your VR build.

High-end processors are generally not needed for smooth VR gaming – the most expensive chips are only going to be needed for niche applications or trying to run a lot of processes at once.

This gives you the flexibility to save some money in your processor choice if needed.

Thanks to the introduction of new Intel Coffee Lake and AMD Ryzen architectures, if you do want serious computing power in your rig there’s never been a better time to do so.

These technology packed chips are on the cutting edge of what’s possible in computer processing and will give your rig more than enough power to take full advantage of VR, 4K gaming, video editing, and multi-process computing.

We’ve listed two options here for one reason: the AMD Ryzen is one of the best gaming processor available to consumers today, but it will cost you as much as an entire PC all by itself.

With 16 physical cores hyper-threaded to 32 logical cores, all running at a base clock speed of 3.4 GHz that can be overclocked to 4.0 GHz, this is one of the most powerful CPU’s money can buy.

Based on the Zen architecture and fitting into a wide-range of existing motherboards, this is a powerhouse CPU.

Alternatively, for about half the cost, you can pick up the i7-8700K.

Running on 6 physical cores threaded into 12 logical cores, the Intel processor is no slouch either.

A 3.7 GHz base clock speed can be overclocked up to a mind-blowing 4.7GHz.

The only downside is the new socket type it takes advantage of, which may necessitate a special motherboard purchase.

We’re recommending the Ryzen 5 2200G here due to its low cost, solid performance, and overclocking potential.

It’s inexpensive and will get the job done with its four 3.5GHz cores.

That being said, if you’re on a budget you have a long list of options for your CPU.

Particularly attractive options include older AMD processors; these can sometimes be found for as low as $50 and are ideal for budget VR builds.

While Oculus recommends 8GB of RAM, we strongly suggest picking up at least 16GB of memory.

For high-end builds, the sky is the limit, and you should pick the amount of memory that makes sense for your use.

Even for budget builds, however, 16GB should be the minimum – anything less and you’re potentially limiting your PCs future usefulness.

You can always upgrade later if needed, but you might as well set yourself up for future gaming titles in your initial build.

This one is pretty simple; get a motherboard with the requisite three USB 3.0 ports and USB 2.0 port that also fits your CPU and GPU.

It’s also worth noting that you shouldn’t scrimp on your motherboard.

Everything else builds off of and runs through this one critical component, so going for a super low budget option here isn’t recommended.

For the first time in many years, it can actually cost you less money to buy a pre-built PC than building your own.

This is thanks to the widespread proliferation of cryptocurrency mining.

Mining cryptocurrencies requires a massive amount of processing power, and coin miners have discovered that discrete GPUs are perfect for this task.

As a result, many discrete GPU options, particularly at the budget level, have been completely bought out by currency miners, leaving few GPUs for gaming enthusiasts to get a hold of.

In many cases, the manufacturers themselves are even sold out of these GPUs, and the cards can sell for double or even triple their initial price on eBay.

As an added bonus, there are many PC manufacturers that have partnered with the makers of VR headsets to provide certified VR PCs for consumers.

These PCs come VR ready right out of the box and are guaranteed to smoothly run VR titles on their respective headsets.

These PCs are competitively priced and require very little setup and no knowledge of building your own PC.

Some of them offer a limited range of customization options, too, so that you can select the components that fit your needs.

Building Your Own PC:

+ More customization options, get the components you want.

+ Can in some cases be less expensive than pre-built PCs.

+ Able to customize your own aesthetics.

+ Little or no setup required. Open the box and go.

+ Generally less expensive than building your own due to the wide unavailability of popular GPU choices.

+ Guaranteed to smoothly run VR media if purchased from a certified retailer.

– Little or no customization.

In order to best experience your new VR headset, there are a few basic guidelines to follow.

VR is an immersive experience that works best in a quiet room with plenty of space.

Many VR titles have special controls that require you to use your hands as the controller.

You may need enough space around you to comfortably extend your arms to the side and in front of you.

Nothing would ruin your first day in VR like punching your monitor when going to attack an enemy!

It’s also very important to be seated the first time you play a VR title.

This is for your own safety; many users report a feeling of disorientation when donning a VR headset or when removing it.

Being seated in a comfortable chair will prevent you from accidentally tumbling over when trying to look at that gorgeous VR sky!

Once you’ve become accustomed to VR gaming, you can experiment with your own environment and find what works best for your immersive experience.