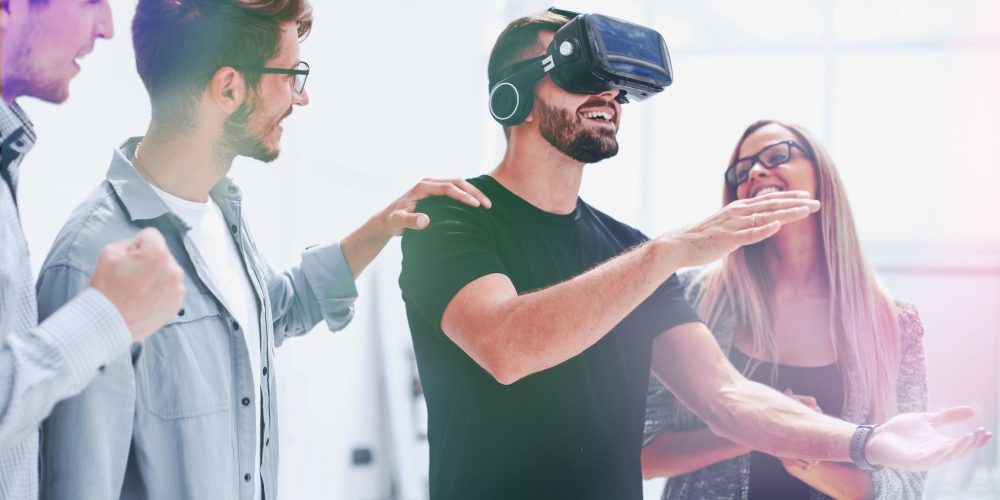 It probably won’t surprise anyone, that a large portion of the consumers of entertainment technologies have eyesight problems and wear glasses to correct these problems.

It doesn’t matter whether you wear glasses.

Anyone can enjoy a good movie, videogame, or a documentary with traditional displays.

With virtual reality headsets, however, there is considerable confusion in the community.

We have written this article to address this confusion and to guide our glasses-wearing viewers to get the best possible experience with virtual reality headsets.

It is possible to enjoy VR like any other person, even if you wear glasses.

However, you will have to do some homework on what equipment you should buy.

It is also important to know how to use it to maximize your enjoyment with VR while wearing glasses.

Can I Enjoy VR Even with Glasses?

With the rapidly increasing popularity of virtual reality for gaming and video viewing, many individuals who wear glasses also want to experience the next revolution in the entertainment industry.

Many people in the VR communities are aware of this confusion.

Therefore, they have tested all of the popular VR headsets with glasses, to help guide our fellow VR enthusiasts who wear glasses.

Many innovative companies have even started selling prescribed lenses that you can replace with the lenses on your VR headset.

Popular headset manufacturers, like HTC and Oculus, are actually working to create a physical way to implement variable focus, so that you don’t even need to wear glasses with your VR headsets.

You just set the focus to your preference and you’re good to go!

Best VR Headsets to Use with Glasses

To provide you with a comprehensive guide, we have experimented with all of the most popular VR headsets to determine the VR headsets that also work the best with glasses.

The VR headsets in the list below are ranked, based on the space available for glasses inside when the VR headset is put on.

Before you check out the list, there is one consistent problem with all the VR headsets on this list.

A common problem is that while wearing glasses, the light from the displays will accumulate at the edge of the frame and that area will shine a little.

While this issue isn’t harmful, it often causes distractions and even feels somewhat irritating.

There is currently no remedy for this problem.

Based on our tests, the PlayStation VR (commonly called PSVR) is the most feasible VR headset for enjoying VR with glasses.

The PSVR has considerable space inside which can fit a majority of frame types.

This makes it the best VR headset to use with glasses.

The drawback of PSVR is that while it is on, you may start to feel uncomfortable.

This is because the pressure on the frame by the headset spreads to the bridge of your nose through the frame.

It can prevent you from enjoying VR for more than an hour or two.

The constant pressure starts causing pain after that amount of time.

If you have a frame that has comfortable padding for the bridge of your nose, your experience will be much better.

Overall, PSVR is an amazing VR headset for people who wear glasses, especially those who like to change their frame types frequently.

The HTC Vive is in second place on this list.

Aside from the PSVR, it is more accepting than almost all of the other available VR headsets for using it while wearing glasses.

According to our calculations, the HTC Vive can accept VR glasses’ frames that are 152 mm wide or less and 60 mm tall or less.

Therefore, if you choose to buy the HTC Vive and have a larger frame than the above-mentioned dimensions, you may have an uncomfortable experience with the headset, or your glasses might not even fit in the headset at all.

If you love the HTC Vive and want to buy, I would recommend that you buy a cheap smaller frame that you can use whenever you want to enjoy VR experiences.

Oculus Rift has had very conflicting results with glasses.

The Oculus Rift has the smallest space for glasses, compared to its main rivals Sony PSVR and HTC Vive.

It also has a lesser depth from the face to the lenses.

This resulted in the frame touching the lenses of the display when some of our team members tried putting it on with glasses.

The frame to be used with the Oculus Rift, can’t be wider than 142 mm or taller than 50 mm.

Otherwise, the frame will push against the walls of the headset.

It could be very frustrating you and ruin your experience.

Much larger frames might not even fit inside the headset at all.

Therefore, if you insist on buying the Oculus Rift, make sure that you can comfortably wear a 142 mm or lesser wide and 50 mm or lesser tall frame.

You should also make the dealer aware of your concern.

It is recommended that you ask them to let you try on an Oculus Rift with glasses.

If the frame even slightly touches the lenses of the display, take it off right away.

This is because the frame can scratch the lens, by continuously colliding with it.

You should be able to comfortably wear the Oculus Rift headset with glasses, without feeling uncomfortable.

It is also important to make sure that after the strap has been loosened, no light is leaking from the outside to the isolated area inside.

This could severely degrade your VR experience.

Samsung Gear VR is a bonus entry in this list.

It is a deserving VR headset, even if it is not a high-end headset and doesn’t necessarily accept larger than average frames.

The reason why the Gear VR is a great headset to use with glasses is that it allows the user to adjust the focus of the lenses of its displays, by rotating the focus wheel.

Try a Samsung Gear VR without glasses and experiment with the focus wheel.

If there is a setting where the focus makes the display crystal clear for your eyes, you don’t need to wear glasses with the Gear VR.

However, the Gear VR is not a high-end VR headset, requires the latest (or one previous generation at max) Samsung flagship smartphones to run, and supports mobile VR content.

Therefore, if you are looking to enjoy serious gaming on VR, the Gear VR is not for you.

Other Headsets Based on The Community’s Vote

There are several less popular VR headsets in the market that have been recommended by a large number of people in the VR community.

The headsets listed below are acceptable for people who wear glasses.

The important thing is to do your proper homework before finalizing your decision.

These tips and tricks may not solve all the problems for you.

However, they provide guidance so that you can make a better and more well-informed decision when buying a VR headset that you’re going to use with glasses.

Try Before You Buy

Most of the dealers who sell (not the online ones) VR headsets are very cooperative.

Therefore, telling them about your concerns and asking them to let you try the VR headset before you buy it usually gets you a positive result.

If you prefer buying online, you can check with your friends or family members, if they have a VR headset that you want to buy.

You can ask them to lend it to you for a day.

This will allow you to check it out, to make sure that it will fit your glasses comfortably.

Numbers and calculations can help you get an idea of the big picture.

However, you should be satisfied with the headset you are about to buy before you actually buy it.

If you don’t do this and the VR headset is only usable for 15-20 minutes at a time, it will never be able to deliver true VR potential.

If you want to eliminate all the issues facing a person with glasses while using a VR headset, you can buy and use contact lenses.

However, this decision should be made based on the cost of the lenses you want to buy.

If the cost of the contact lenses is too high and you’re only buying them for your VR time, it would be more economical if you used glasses instead.

Some headsets tend to put pressure on the frame when the straps are tightened.

As a result, the frame puts pressure on the bridge of your nose,  which makes things uncomfortable very quickly.

If the temples of your glasses have some space to move forward, put some pressure on their tips to push them forward after the strap has been tightened.

You should exercise caution and not let the frame touch the display lens, since it may scratch it.

Keep Your Glasses Clean Before Going In

The inside of the VR headset is firmly isolated with outside light and the light from the display has to cross your glasses to reach you.

Due to the isolation, dirt or spots on your glasses can produce a noticeable problem.

You may feel like you need to wipe your eyes to remove the blurry spots from your vision.

This is usually caused by dirt on your glasses.

You should, therefore, clean your glasses properly, every time you dive into virtual reality.

Have Loads of Fun

If not for the fun and thrill of virtual reality, why should you buy an expensive high-end VR headset?

Forget the fact that you need to wear glasses in real life and go the extra mile to have fun in VR.

There are many options for dealing with the problems you might face with VR headsets while wearing glasses.

It is important to do thorough research before buying anything.

This also applies to VR headsets.

Choosing a headset just because it can fit a larger number of frame types, would be an unwise decision.

Every headset has different pros and cons in terms of the availability of content, design, performance, and comfort.

The best goal is to find the sweet spot, where all your preferences are balanced.