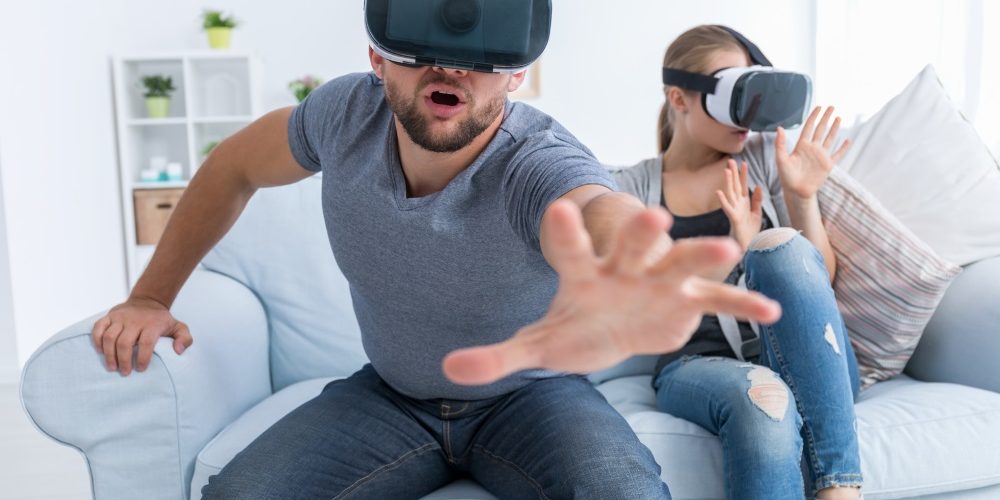 Many people have now developed an interest in VR content and more creative and capable content development companies are entering this fairly unchartered segment of the IT industry.

We also know that for high-end VR video games and graphics-intensive VR experiences, the cost of getting VR ready is quite high.

One can easily spend somewhere between $1,500 to $4,000 to buy a high-end VR headset, like the Oculus Rift and HTC Vive, and a powerful gaming computer to connect to.

However, if you aren’t a hardcore gaming fanatic, virtual reality can be very affordable for you, if you just have a smartphone powerful enough to support a mobile VR headset and mobile VR platforms, like Samsung’s Gear VR and Google’s Daydream.

A few years ago, Samsung almost had a monopoly over the mobile VR industry, since the Samsung Gear VR was the only available mobile VR headset in the market.

In addition, it was only compatible with the company’s high-end flagships, like the Samsung Galaxy S-series and Samsung Galaxy Note-series smartphones.

Both of these smartphones are very expensive, compared to many of their competitors, like Huawei’s and LG’s flagship smartphones.

Today, however, we have a number of mobile VR headsets with a versatile price range.

They support a number of smartphones that aren’t necessarily manufactured by the same company, as the mobile VR headset itself.

Now that we have a versatile choice in the market, the question that remains is, “Which smartphone should you buy for the best mobile VR experience?”

We have compiled this list of some of the best smartphones for virtual reality that are capable of easily running the latest mobile VR experiences and are also compatible with a popular mobile VR headset and VR platform.

Our goal here is not to list every smartphone that can run a VR app.

It is to list the smartphones that have enough processing and graphics power to run any of the latest mobile VR experiences, which also provide good value against their cost.

The smartphones that we have selected are compatible with at least one mobile VR headset easily available in the market.

Why not Сhoose Any of the Latest High-End Smartphones?

The reason why you can’t enjoy a seamless mobile VR experience on any of the latest high-end smartphones is that not all of the smartphones are currently supported by the popular and rapidly-growing mobile VR platforms.

Google Cardboard, Google Daydream, and Samsung Gear VR are the only mobile VR platforms in the market that have a great app ecosystem and are constantly updated with new content.

Mobile VR Headsets Will Make Your VR Experience Even Better

While the smartphones mentioned below are fully capable of running VR applications without any need for a mobile VR headset, I would strongly recommend that you buy one.

Mobile VR headsets are recommended because that is how virtual reality is meant to be enjoyed.

You can hold your smartphone in front of you and move it around to look around the virtual space.

However, the experience will be very bland.

A mobile VR headset has the necessary design features to completely isolate you from the real world.

It allows you to fully indulge yourself in the virtual world of the VR experience that you are playing.

If you are afraid of wasting money, see if any of your friends have a mobile VR headset and give it a try.

I assure you, once you have experienced the immersion offered by a mobile VR headset, it will be almost impossible for you to enjoy mobile VR without it.

This list would work best for you if you are looking to get some juicy mobile VR capability from your new high-end smartphone that you are about to buy.

Spending up to $1,000 or more just to get mobile VR experience, would be quite unwise.

If you own any of the devices on this list, then you’re in an even better position.

You only have to buy a mobile VR headset, hook up your smartphone and start enjoying mobile VR experiences.

Samsung has a strong reputation in the mobile VR industry.

This is because Samsung Gear VR existed, even during the era when virtual reality was just a rumor mentioned in IT-enthusiast circles.

The company, as well as the technology, have a come a long way since then.

Since the Galaxy S9/S9+ and Note 9 are the latest and the most powerful flagship smartphones by Samsung, they are arguably the best smartphones for mobile VR today.

Please note that the Galaxy Note 9 is only compatible with the Gear VR headsets with model numbers SM-R325NZVC***.

The LG V40 ThinQ is no different. The LG V40 has a similar price tag very close to the Samsung Galaxy Note 9.

Its performance is almost equal to the Note 9.

The LG V40 ThinQ is compatible with Google Daydream and Google Cardboard.

It means that your VR experiences with the V40 ThinQ will be even crispier.

The smartphone does not perform as well as some elements of the Note 9.

However, it is a very powerful and great smartphone for mobile VR.

Google has been very active in the mobile VR industry recently.

This is why it isn’t surprising that Google’s flagship Pixel XL smartphones are among the top candidates for smartphones offering the best mobile VR experience.

The Google Pixel 2 XL and Pixel 3 XL are compatible with Google Daydream and Google Cardboard.

There is no major difference between the Pixel 2 XL and Pixel 3 XL, except for the chipset.

This will not have a major impact on your VR experiences.

The Pixel 2 XL would serve as a great VR engine if you don’t want to spend the extra money just for a difference of 1440×80 pixels.

The Motorola Moto Z2 Force is a great alternative for Google Pixel 2 XL.

It is also a powerful engine for mobile VR. The Moto Z2 Force supports Google Cardboard and Google Daydream.

It is a perfect option for you if you aren’t looking to sell about $1,000 for a powerful smartphone that also supports the latest mobile virtual reality experiences.

The Z2 Force features a 5.5-inch display with 1440×2560 display resolution, which is a great configuration for mobile VR.

The Z2 Force is powered by the Qualcomm Snapdragon 835 chipset, which makes it equally as powerful as the Google Pixel 2 XL flagship smartphone.

Even when using the same chipsets, there can be differences in the performance of two smartphones, based on several factors, like the default applications that are running in the background or the type of UI/UX skin being used in the smartphone.

Nonetheless, the Motorola Moto Z2 Force is a great option to fulfill your thirst for mobile VR.

Not everyone is enthusiastic enough for VR to spend $800-1,000 or more for a powerful smartphone that supports VR.

Google’s Pixel smartphones are excellent for mobile VR experiences, especially because Google optimizes its smartphones to perform better with its own Google Cardboard and Google Daydream mobile VR platforms.

The only reason why we don’t recommend these smartphones as some of the best choices, is that the Google Pixel, Pixel 2, and Pixel 3 feature a 1080p display.

This is not a great display resolution for virtual reality.

The Google Pixel XL is also a great device for mobile VR.

However, it features the Qualcomm Snapdragon 821 chipset.

The Snapdragon 821 chipset is two generations older than the company’s latest and greatest Snapdragon 845.

The difference between Qualcomm Snapdragon 835 and 845 is not that great.

If you are looking to go for a budget smartphone for VR, the Google Pixel XL is arguably your best option.

The Samsung Galaxy S8 and S8+ are the most powerful smartphones by Samsung, after the latest Galaxy S9 duo.

The only major difference between the S8+ and the S9+ in terms of performance is that the S8+ features a Snapdragon 835 chipset, while the S9+ features the latest Snapdragon 845 chipset by Qualcomm.

The Samsung Galaxy S8 and S9 duo feature Samsung’s Exynos 8895 and 9810 chipsets in some markets.

The Samsung Galaxy S8 or S8+ can be bought for about $450-550 through many discount deals and promotional offers.

Therefore, buying a Galaxy S8+ would be a very wise decision, if don’t want to purchase the latest flagship smartphone by Samsung.

As for the Samsung Galaxy Note 8, the smartphone is evidently better and more powerful than the Galaxy S8+.

It could be your favorite new smartphone, along with being a great VR engine that can easily run the latest mobile VR experiences available on the Samsung Gear VR mobile VR platform.

They are both immensely powerful, feature crisp display resolutions and cost must less than the LG V40 ThinQ, their successor flagship by LG.

This is not much worse than most of the latest high-end smartphones in the market.

The LG V30 Plus is powered by the Snapdragon 835 chipset which, as discussed earlier, is similar in performance to the latest Snapdragon 845 chipset.

However, you can buy the LG V30 Plus for about $50,0 through several discount deals and promotional offers that are available online.

Considering this huge difference in price in return for a small difference in performance, the LG V30 Plus is a great option for you to pursue your mobile VR needs.