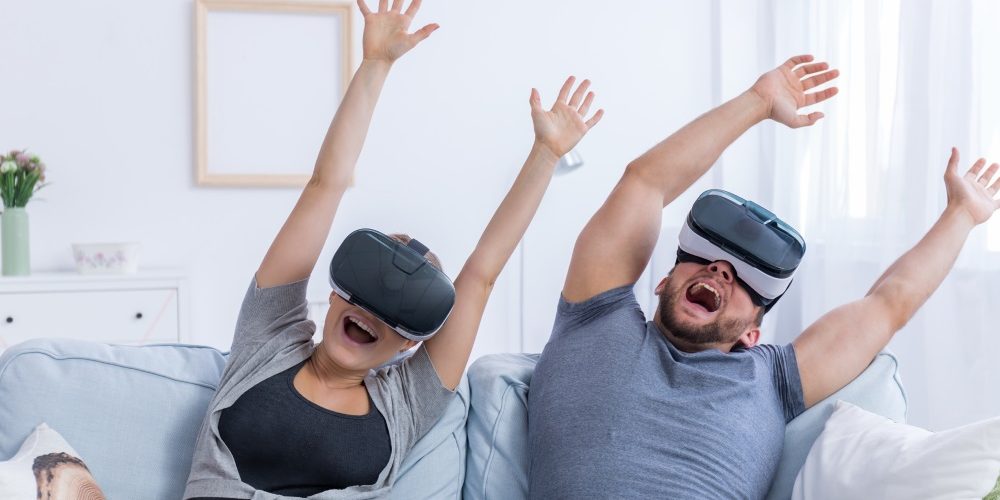 Virtual reality gives you a new experience to play games with your friends.

VR systems have made their way onto multiple platforms and the amount of games are growing.

If you’re tired of playing VR games on your own, here are twelve of the best multiplayer VR games.

Many of them are available on multiple platforms.

You’ll find at least one that both you and your friends can enjoy together.

Have you wanted to hang out with some of your college friends but they’ve moved halfway across the country?

Sports Bar VR helps you and your friends get together for a Friday night out at the bar without leaving the house.

You can play a game of pool with up to 8 of your friends, or against the AI if you feel like playing alone.

The game lets you walk around and interact with the objects.

Other games that are included include darts, Skeet-Ball, air hockey, chess, shuffleboard, and other games.

You can complete daily challenges to unlock collectible items like hats, pool cues, table skin decals, and other objects to customize your avatar and the bar.

Sports Bar VR is available on Steam, Oculus, and a PlayStation Store.

VR Karts lets you and your friends experience Mario Kart again without having to dig out the Super Nintendo.

You can customize your cart and select from a variety of maps to race on.

If you aren’t ready for your friends, you can practice against the computer to gain an edge.

Similar to Mario Kart, there are various trophy modes that allow you to compete for the gold.

This makes it helpful if your friends are on various systems.

Echo Arena allows you and your friends to go head-to-head in a 5 V 5 private match.

You play as a robot in a zero-gravity environment.

Here you move about the arena trying to score the most points for your team.

You can punch your opponents to disable them temporarily.

There are also various floating obstacles in the arena and you can push and pull off of them to move around the field.

If you prefer to watch the matches instead there are slots for up to five people to watch the game as spectators.

Echo Arena is currently free as an exclusive on the Oculus Rift.

The Unspoken allows you to play as dueling wizard.

The game has a single player campaign that takes you through a post-apocalyptic Chicago setting.

Against your friends you can play in a magic Fight Club style arena.

The arena has an urban feel such as being able to levitate and throw cars at your friends.

Using your hands i.e. the controllers, you can use different Spells at your disposal to beat your friends online.

While this game can create some grudges with your friends from constantly beating them, it can be a fun title to pick up if your group has the Oculus Rift.

Do your friends enjoy massive multiplayer online role-playing games, and being able to pilot their own spacecraft?

When Elite dangerous was first released in 2014, there was a fragile relationship with the player base and developers.

Since their rocky start, the developers have made changes to improve the overall experience for players based off of user feedback.

If your group of friends are looking for their next online experience, Elite Dangerous can help fill the MMORPG void.

You will want to be able to devote ample amount of time to play Elite Dangerous as with any online game.

This game is available on the Oculus Rift and on Steam for the HTC Vive.

Minecraft transforms to a whole other level when you add VR to the mix.

For those unfamiliar with Minecraft, this game allows you access to a near infinite world made up of blocks.

What do you do in Minecraft?

You and your friends play in an open environment where you’re able to use your creativity to build massive structures and survive off of the land.

With the VR version you can either play in first person mode or switch to a cinema mode.

One nice feature is that Oculus Rift and Gear VR players can play together with cross platform functionality.

Raw Data was designed with virtual reality in mind.

Special attention was placed on creating an active VR combat experience where your arms control the weapons in life-like design.

The PVP option lets you play in up to 5 V 5 matches on a variety of maps.

You can choose from a variety of classes similar to a role-playing game, along with a variety of firearms, laser swords, and even your fists.

If you don’t enjoy playing against your friends you can also play the campaign in an online co-op that is cross-platform compatible with the Vive and Oculus.

Keep Talking and Nobody Explodes

Most VR games requires each person to have their own system and VR headset to enjoy multiplayer.

Keep Talking lets you play with a large group of people and a single headset.

This could be a good option if you have friends over for a party or game night.

One person will wear the headset and be the one defusing the bomb.

The rest of your team can’t see the bomb and will try to guide you by referencing a set of diffusal manuals that are available online.

Communication is key to be able to win this game.

This game is available on the Rift, Gear VR, Vive, Daydream View, and PlayStation VR.

Very similar to The Unspoken, Wands is a mobile alternative to get your wizard arena fix.

This game is strictly an online multiplayer environment where you face off against friends in a duel of wizards.

Wands has an 1880s London theme, and attention was placed on created an immersive experience with decent graphics.

If you need to practice, there is an offline practice mode available as well.

This title is available for the Daydream View.

Onward sets itself apart from the many other VR shooter games available.

Some shooters can make you feel motion sickness, but the developers have worked hard to make a smooth control system.

As a military simulation, Onward tries to be as realistic as possible with how the gunplay works.

This is also a good game if you’re playing with friends.

You can go head-to-head in 5 V 5 matches that require you to fulfill different objectives.

For a more friendlier game you can also team up with each other and fight against the AI.

If you enjoy robots and sports mixed together, RIGS can be a fun game for you and your friends.

As you win matches, you upgrade and replace your robot with different guns and other changes.

You have four different robot styles to choose from, each with their own strengths and weaknesses.

For multiplayer there are three games to choose from.

End Zone play similarly to football with the addition of guns and robots.

Powerslam and Team Takedown are two other games that put a twist on basketball and robot fighting.

Rec Room is a collection of games and mini games that you can play with your friends, and new ones that you met along the way.

Create your own avatar that represents you in game, and customize your appearance over time.

Rec room is designed to be cross-platform so that you can play with your friends regardless of the system that they’re on.

Some of the games that you can play include laser tag, paintball, charades, and other games.

You can even use the creative tools and make your own games to share with your friends.

The best thing about rec room is that it’s completely free.

Virtual reality has become a growing and lucrative technology.

When most people think of virtual reality they think of video games and movie experiences.

With advances in technology virtual reality is finding its way into the medical field, the Arts, architecture, and other aspects of society.

In the simplest terms VR technology allows you to immerse yourself in a digital world.

VR headsets make up the large part of a VR system.

They provide your eyes with the view into the digital world, and have a series of sensors that track your head movement and other readings.

These sensors help the VR system mimic a response in the virtual world.

Some VR systems will have additional sensors and a set of controllers that help to capture spatial movement for added immersion.

Together with the headset, you can enter these virtual worlds.

How does Virtual Reality work?

A VR system has to trick your brain into thinking that you were standing in a 3D World.

Most VR headsets use a stereoscopic display.

What this means is that each of your eyes are seeing two slightly different angles of an image.

This allows the headset to simulate depth and helps to add the immersion experience and make it more realistic.

Other aspects that affect your VR experience is the refresh rate and the frames per second (FPS).

Headsets like the HTC Vive and Oculus Rift have a 90 Hertz refresh rate and 90 FPS.

These numbers determine how quickly the headset can display images and frames.

Generally, you want the two numbers to be the same.

If these numbers are out of sync you can start to experience motion sickness.

Field of vision determines how much of the world that you can see at a single moment.

When you look straight ahead your body has a field of vision of about 180 degrees.

Most VR headsets have a lower field of vision.

The Vive and Rift for example have a 110 degrees FOV.

Sensors and controllers on the other hand help you to interact with the virtual environments you’re experiencing.

Some VR headsets will use infrared sensors and controllers that are capable of tracking the subtle movements of your hands, arms, and location of your body in a room.

All of these features help to capture and mimic motion in the virtual environment.

Sound is the last major component that makes up a VR system.

Best VR systems will make use of 3D audio.

This allows the sound to be simulated from different angles which mimic real life experiences.

For example, if a helicopter was flying overhead you would hear it first behind you.

Gradually the sound with move towards the front.

Visually you would also be able to see the helicopter itself behave in a similar fashion.

Together the audio and visuals help to make a more immersive experience.

The devices become smaller and the quality becomes closer to mimicking real-life experiences.

As the technology continues to grow, it will allow virtual reality to be easier integrated into more aspects of our daily lives.